Latex can help replace polluting materials such as leather and plastics, according to designers working with the plant-based material.

Despite its fetishistic associations, designers are waking up to its credentials as a sustainable alternative to animal and petroleum-based materials.

This past year saw latex turned into full-body suits by French fashion house Balmain, while young designers Harikrishnan and Fredrik Tjærandsen made headlines with inflatable garments made from the stretchy material.

Designers "starting to realise" the benefits of latex

"Latex has often been related to fetishism, but I think designers are starting to realise that it's a natural fabric which makes it very interesting in today's discussions about ecology and ethical issues," French fashion designer Arthur Avellano told Dezeen.

"It is a noble and natural material that does not kill animals, does not cut down trees and isn't plastic either."

The material has suddenly become highly sought after: in the six months up until March, latex sheeting manufacturer Supatex reported a 40 per cent rise in orders, with an increasing number of clients inquiring about the material's environmental credentials.

"Latex is preferable to leather due to the fact that none of the additives is derived from animals," said Nange Magro of latex fashion brand Dead Lotus Couture. "It has a much closer fit and a much higher stretch than leather or PVC."

"I immediately fell in love with it due to the tactile feeling, the smell, the sensation of it," Magro told Dezeen earlier this year. 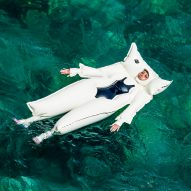 "Leather is animal skin and vegan leather is essentially a plastic sheet that's going to survive on earth until after humanity has gone extinct," she told Dezeen.

"Latex is the best of both worlds because it's both vegan and biodegradable."

Latex "bleeds out" of rubber trees

Latex is a natural, renewable material derived from the rubber tree. Since the trees are not cut down during harvesting, its production is sustainable and carbon-negative.

It is named after the sticky, milky white liquid produced by many plants to protect themselves from pests: when the bark of a latex-bearing plant is damaged, latex coagulates to seal the scar while the bark regrows.

Commercial latex sheeting is derived from the rubber tree, hevea brasiliensis, which is native to Brazil and which is grown in plantations in South America, west Africa and south-east Asia.

Natural rubber latex, which is also used to produce natural rubber, is extracted via a process called tapping. This involves scoring the bark so that latex drips out into a receptacle.

"So you're taking what it has to offer and then leaving it to re-bark and re-heal before you're able to tap it again in a few weeks time."

The natural rubber latex, which consists of natural rubber microparticles suspended in water, is then processed into commercial latex sheeting by reducing the water content and adding pigments and coagulants to create the desired colour, stretch and tear resistance.

"We add things like sulphur and zinc in minimal quantities of roughly half a per cent in proportion to the raw material," explained Lewis.

"These are essential in order to give the [latex] its elastomeric properties, otherwise you'd end up with a piece of [latex] that's very limited in its stretch with poor elongation and breakpoints."

As designers are focusing on the full lifecycle impact of their products some are reconsidering widely used materials such as animal leather and plastics including polyvinyl chloride (PVC) or polyurethane (PU).

Those like Davis and Avellano, who first turned to latex for its "visually impactful" texture, are now reappraising the material for its green credentials.

Both designers are independently working to make latex more available as day-to-day clothing by applying it to casual silhouettes like T-shirts or loose-fitting trousers.

"In the beginning, I chose to work with latex for the aesthetic rendering and of course the challenge of finding new techniques to make it wearable," explained Avellano, who has been using the material in his fashion collections since 2013.

"But I realised by experimenting with it that it is the perfect alternative to leather or plastic."

Australian designer Molly Younger, who has fashioned latex into a series of flesh-like bags and pendant lights, agrees.

"With a growing need for leather alternatives, latex can start to fill this gap," she said."Natural latex is durable, washable and can be moulded to any shape imaginable, making it an ideal material for many design applications."

The material can also match the textural and performative qualities of polyurethane, which is widely used in footwear and furniture production.

"Latex is the only solution that exists that gives us a similar performance to what you can get from PU in athletic shoes but without it being a crude oil-based synthetic," explained Tull Price, the founder of Australian footwear brand Feit, which uses latex to form the outsoles of roughly 30 per cent of its collections.

"It's really flexible, it's comfortable and durable, although not as durable as hard rubber."

Meanwhile, architect and designer Nina Edwards Anker has used natural latex in combination with lentil beans to form the filling of her Beanie Sofa.

"Latex is already big in the bedding world in different forms and the furniture industry needs to catch up," she said. "Especially because organic latex is more comfortable than artificial foam."

"It is against mass production and consumerism"

Despite these benefits, latex can be a demanding material to work with, forcing designers to slow down their production processes.

"In terms of construction, working with latex is almost ritualistic," explained Harikrishnan.

"It takes a lot of time, patience and practice, which means it is against mass production and consumerism. It took me 48 hours as a first-timer to create my inflatable trousers."

Even after being processed, many forms of latex remain sensitive to light as well as sweat and oils. This means that the finished products have to be properly maintained. But Harikrishnan sees this as a positive as it means users have to learn to appreciate their products.

"It needs to be treated gently but that also means the material stays biodegradable and will eventually return to its natural form, meaning zero waste or harm to the planet," he said.

Under prolonged exposure, the material becomes brittle and discoloured, meaning that owners need to follow a care regiment of polishing it and applying talc, as well as storing it away from direct sunlight.

"If you're thinking of buying a garment you should be ready to enter a relationship with it for the rest of its life because it is now your responsibility," said Davis.

"I think with latex this is extra true because you really have to look after it, it's only going to last as long as you take care of it."