Architecture studio ZJA has designed the concept for a museum in the Netherlands to house the wreck of the historic ship Amsterdam, which is currently sunk off the coast of Hastings, UK.

Named Docking the Amsterdam, the proposal will recover and relocate the wreck without ever taking it out of the water. A museum will then be built around a glass tank containing the wreck allowing visitors to view the 40-metre-long shipwreck from all angles.

The Amsterdam ship was built in the 18th century by the Dutch East India Company (VOC) but was engulfed by sand on the English coast after becoming unsteerable in 1749 on its maiden voyage to Asia.

Though the ship's exposed superstructure has since been destroyed, its hull and contents remain almost completely intact below the sand. The museum has been commissioned to save its remains from any further erosion.

Though the exact site for the museum is yet to be decided, the team is investigating locations in Amsterdam as this is where the VOC shipyard was located and the ship was built.

While salvaging the wreck from an unsafe site and creating facilities for archaeologists, the goal for Docking the Amsterdam is to shed light on Dutch maritime history.

This will include exhibition spaces designed by ZJA to spotlight the "complete story" of the VOC, focusing primarily on its involvement in slavery and the impact of this on today's society.

"The urgency of the project is twofold," ZJA told Dezeen. "Firstly, the ship was constructed by the VOC," it told Dezeen.

"Today's perspective on the history of colonialism, the slave trade and international trade makes reassessment and discussion essential. Secondly, the wreck is now in a place with a huge tidal range, the currents that accompany this are eroding the wreck."

To relocate the Amsterdam wreckage safely, it will be lifted from the seabed using a large basin, or salvage dock, made from steel. This structure will also extract some of the water and sand surrounding the ship.

The basin will then be sailed to Amsterdam, where it will be permanently docked and transformed into an underwater museum.

Above water, the museum will be sheltered by a white, curved canopy, described by ZJA as a "protective blanket". This will be made from tensile fabrics and also shelter a walkway at the top of the steel basin that will provide visitors with aerial views of the wreck.

Few details have been disclosed about the museum's interiors, though it is expected that the steel basin will be exposed throughout to give an industrial aesthetic.

Glass will be used to line the walls of the dock that face the shipwreck, allowing visitors to observe it from several angles and watch "live excavating" of the ship by diving archaeologists.

"Visiting this venue is like entering a theatre that stages the investigation in progress and engages the public with the discoveries the divers and researchers do inside the wreck," said the studio.

The discoveries from its excavation will be placed around the exhibition spaces, alongside a series of private research facilities, such as laboratories and training spaces for underwater archaeologists. 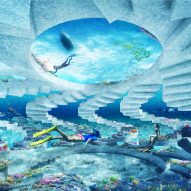 It will be realised by ZJA in collaboration with Gawronski, Deloitte, Mammoet, Amsterdam Shipyards and the Chief Technology Office of the city of Amsterdam.

Elsewhere, OMA is currently developing an underwater sculpture park in an attempt to protect the shoreline of Miami Beach against the effects of climate change. Many of its installations will only be viewable while snorkelling.

In 2019, Snøhetta completed Under in the remote village of Båly, Norway, which is the "world's largest underwater restaurant".