Iranian practice ZAV Architects drew on the colourful landscape of the island of Hormuz for this holiday community that is housed in around 200 brightly coloured domes overlooking the Persian Gulf.

Described by ZAV Architects as a "cultural residence", the group of buildings is located around five miles from the main town on the Iranian island of Hormuz.

The domed accommodation was designed to encourage tourists to visit the island while being an alternative to standard high-rise holiday apartments.

"Presence in Hormuz intends to bring visitors to the forgotten island of Hormuz in order to increase the national and local GDP (gross domestic product) with the help of architecture," explained the studio.

"Often the answer of architecture to designing accommodation by the seaside is a tall elevated structure that overlooks the surrounding landscape," it continued.

"This project scales down a larger development into a multitude of smaller spatial units, forming a field of colonies that interlace in a fluid fabric similar to that of a neighbourhood."

ZAV Architects arranged the domes closely together to create a sense of community and give the development a distinctive outline that was drawn from the island's natural forms.

"The domes have several types and sizes in their arches, which combined create a skyline matching that of the island of Hormuz which was studied thoroughly in our work," said the studio.

"As the project is located in an open area a few kilometres away from the city, its spatial compartments, domes of different colours and sizes, create a skyline topography that matches itself to the colourful landscapes of the island."

All of the domes in development have been painted in bright shades of red, yellow, blue and green to give the community a colourful exterior.

This bold use of colour continues inside the structures, where the interior walls are painted in matching shades and furniture is coloured red, yellow, blue and green to match.

"You cannot remove colour from the island of Hormuz – its coloured sand beaches change even the colour of the blue sea, nor of its people, for whom colour is an important mean of expression be it in their clothing, the interior of their houses, or even their food," said the studio.

"The colours surrounding us in Hormuz gave us the courage to be bold like the island."

Each of the domes was constructed using a low-tech method with a structure made of stacked sandbags, which were filled with soil and sand dredged from Hormuz dock. The sandbags forms were supported with steel and finished with cement. 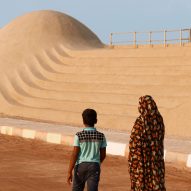 According to the studio, construction method meant that the buildings could be largely completed by people in the local community.

"It is built with low-tech construction methods which makes possible the contribution of unskilled workers possible, they all became trained masters and operators after work was due and continue to collaborate in projects inside and outside the island," said the studio.

"There are upcoming programs in a community and learning centre where people can improve their hospitality skills as well."

ZAV Architects hopes that the project will contribute to increasing tourism and supporting the local community on the island.

"Architecture is a medium for creating and spreading a sensibility that reconsiders the conventional ways of seeing the status quo, in order to move towards change and improvement," said the studio.

"Architecture is a platform for changing the world and its mission is to spark innovation," it continued.

To do so it needs to design processes rather than objects because processes can take a project to places one cannot predict or imagine at the beginning of the work. So we constantly seek to bring architecture out of its comfort zone."

It previously designed The Rong Cultural Centre on the island of Hormuz, which was named Cultural project of the year at Dezeen Awards 2019.

Photography is by Tahmineh Monzavi, Soroush Majidi and Payman Barkhordari.