Architecture firm Taller Sintesis has completed a series of brick volumes with arched roofs for a large kindergarten in Colombia.

El Porvenir Children Center is located in Rionegro, a town about 30 kilometres southeast of Medellín. The campus sits along the edge of a dense, middle-class neighbourhood.

Taller Sintesis, a Medellín-based firm started in 2008, was charged with designing a new facility to replace a smaller one that did not meet the public kindergarten’s current needs.

The firm conceived eight distinct structures for the kindergarten, which is located on a verdant site bordered by a ravine. In total, the 2,620-square-metre facility can accommodate up to 400 children.

At the core of the complex is a central, bar-shaped volume that stretches across the site. Perpendicular to this volume is a staggered row of seven barrel-vaulted pavilions, which project toward the ravine and a newly planted forest.

These have walls formed of red brick and roofs sheathed in white metal. The team incorporated floor-to-ceiling windows and sliding glass doors, which enable occupants to feel connected to the outdoors.

This connection is strengthened by the presence of grassy courtyards between the pavilions.

"These allow not only adequate ventilation and lighting but also enable a direct relationship between the children and nature, giving the landscape a permanent presence in the educational spaces and enabling the effective integration of the classrooms with nature," said the firm.

The central volume encompasses a range of spaces, including offices, services for parents and students, a sheltered waiting area and an auditorium that opens to the exterior. There also is a canteen that doubles as a large, covered courtyard. 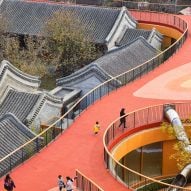 The arched pavilions hold classrooms and play areas. Bright colours, including vibrant shades of blue and yellow, give each room a particular character while also allowing for easy identification.

Many elements were designed with the size of children in mind, such as carved-out spaces for reading and playing.

"Niches, windows and furniture are arranged at their height, allowing them to build their own landscape, only available to them," the team said.

Other educational facilities in Colombia include a preschool in Santa Marta by El Equipo Mazzanti, which features modular units arranged around triangular courtyards.

Photography is by Mauricio Carvajal.