Toronto-based artist Krista Kim has sold the first NFT-backed digital home for over half a million dollars, as interest in virtual design continues to grow.

Based on blockchain technology, NFTs act as digital certificates of ownership and enable digital artworks or designs to be bought, sold and collected.

Described by SuperRare as "the first NFT digital house in the world", Mars House is a 3D digital file that can be experienced in virtual reality.

Mars House designed to be a "light sculpture"

Kim designed the home in 2020 to be a space that embodied her philosophy of meditative design and worked with an architect to render the house using Unreal Engine, software that is commonly used to create video games.

She describes the house, which overlooks a moody mountain range and features an open-plan design and floor to ceiling glass walls, as a "light sculpture". 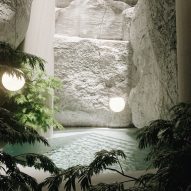 Colourfully-hued gradients made by the artist cover the floor and ceiling. The digital environment can be experienced accompanied by a song produced by Jeff Schroeder from the band The Smashing Pumpkins.

The digital home can be experienced in virtual reality and, according to Kim, could also be overlaid onto the real world to create an augmented reality (AR) environment in apps such as SuperWorld in future.

"Soon, we will all live in AR through our real environments using SuperWorld, a new app that has mapped the entire world for AR interface," Kim told Dezeen following the sale.

"Virtual real estate based on the real world can be purchased on SuperWorld, and in the very near future, this app will allow us to mint 3D NFTs and create a marketplace of digital AR assets."

"Mars House is ready for that future, where it can be transposed onto our real environment and enjoyed with others," she continued.

"We can eventually have it on the surface of Mars. It represents a paradigm shift of our definition of art in an augmented reality world."

This is a "crypto revolution"

The buyer of Mars House will be sent a digital 3D file of it. However, this is not itself the NFT.

The NFT exists as an authentication certificate that is stored on a blockchain, equivalent to a title deed for a real house, which verifies that the buyer owns it.

NFTs have opened up a world for digital artists that allows their works to be bought, owned, traded and collected through digital marketplaces. 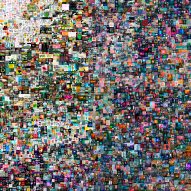 A number of designers and artists have recently sold their work as crypto art, with Christie's selling a jpeg created by artist Beeple for a world-record $69 million.

Barcelona-based Andrés Reisinger put ten pieces of virtual furniture under the hammer last month, which sold for almost $450,000 in total, while Alexis Christodoulou sold his architectural renderings for $340,000.

"With more equitable wealth distribution, democracies also have shifts of power away from corporate hegemony into political representation of the people – and the people want sustainably and change," she added.

"NFTs are part of the solution. There are endless possibilities and it will become the greatest creative renaissance in human history."