The emergence of NFTs will trigger a wave of artistic innovation and allow creatives to sell avant-garde work directly to customers, according to digital designers.

"We're right at the beginning of the frontier," 3D artist Alexis Christodoulou told Dezeen. "This is an opportunity to create something beautiful because you're in charge again."

"You can directly connect with the people that consume and like your art," added Andrés Reisinger, who auctioned off ten virtual furniture pieces as NFTs in February.

"You don't need any middle man like a brand or gallery because we have replaced these institutions with code."

Non-fungible tokens (NFTs) have been in the news recently as they have been used to sell virtual artworks, fashion and entire houses.

"I think a lot of high-level artists and designers will try to move away from the commercial design industry and focus more on their own projects," he told Dezeen.

"It will take some time before the world understands the true power of NFTs but being able to create a unique digital file opens up a lot of doors. What we are seeing right now is just the beginning."

"Not many formats have been explored"

Non-fungible tokens are digital certificates of authenticity and ownership that can be assigned to digital assets such as a video, jpeg or gif.

Each token is individually recorded or minted on a blockchain much like a cryptocurrency transaction, allowing the associated asset to be bought, sold and collected.

Although this technology has been around since the mid-2010s, it has gained global attention in recent months. In March, a jpeg by digital artist Beeple sold for more than $69 million becoming the most expensive digital image ever.

Since then, independent creators have minted an increasingly vast array of digital assets and released them on NFT marketplaces such as OpenSea, Rarible and Nifty Gateway.

However, despite the huge amount of interest, designers believe that the technology's real potential is still to be uncovered.

"Maybe you could make a quick million if you're lucky or get some good press out of it but there are other opportunities lurking in the shadows," said Christodoulou. 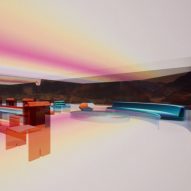 "It's time to experiment and shape the market," he added. "There won't be another opportunity like this."

"Not many formats have been explored," added French artist Joanie Lemercier. "What is common right now, the short video loops and the jpegs – I don't think that's the best we can do."

NFTs allow designers to "directly connect with the people"

NFTs have allowed 3D artists such as Wannerstedt, Reisinger and Christodoulou, who have massive social media followings, to monetise their work.

Creators can also programme royalties into NFTs so that they receive a percentage of the profits every time their work is sold on to a new owner.

As a result, the designers said they are able to spend more time working on projects directly for customers.

"I work for commercial brands seven days a week and have to do my own work in the mornings and evenings," said Christodoulou. "For my next NFT drop, I get to put aside a whole month to do some R&D and really explore some creative ideas."

Kerry Murphy, co-founder of virtual fashion house The Fabricant, predicts that this decentralisation of power will also impact other industries.

"You can sit on your couch all day, doing the thing you love most and make a living from it as well – that's what NFTs will allow for every single creative industry," he told Dezeen.

"I'm not saying it's going to come fast but once it does, the disruption is going to be massive."

Designers predict that NFTs will prompt an explosion of new works designed to make the most of digital technologies such as augmented and virtual reality.

Christodolou is experimenting with time-based programmable assets – digital images that evolve over time or react to its owner – as is Canadian lighting brand Bocci.

The company, which is currently selling DIY instructions for a candle as an NFT, is investigating how the technology can reflect the production process behind a product.

"Time-based programmable assets intrigue me because they might interweave into these processes and contribute to them," Bocci founder Omer Arbel told Dezeen.

Toronto artist Krista Kim, who sold the "first NFT digital house in the world" for over half a million dollars in March, argues that with the evolution of AR, her digital property will become a place people can socialise in.

"The potential of NFTs as a medium goes far beyond just posting pictures and videos on a screen," she told Dezeen. "It will go into 3D programmable assets that are viewable through AR and programmable for people to interact with."

"The possibilities are endless," she continued. "When AR is fully unleashed in our real time and space, we are going to experience a creative and artistic renaissance."

With everything from memes to tweets and digital fragrances being minted, there are signs of NFT fatigue as the number of sales and average price has started to drop.

Another major concern about NFTs is their environmental impact, with architect Chris Precht among several creators to cancel upcoming releases after discovering the associated carbon emissions.

Most NFT marketplaces use the Ethereum blockchain meaning that when an NFT is minted and sold all of the computers in Ethereum's network race to verify this transaction using a proof of work (PoW) algorithm. This process consumes large amounts of energy.

Artist Lemercier, who calculated that his first six NFT artworks consumed as much electricity as his studio did in three years, argues that the quickest and easiest way to mitigate the impact of NFTs is to move away from Ethereum-based marketplaces.

Emerging platforms such as Hic et Nunc use the Tezos blockchain, which runs on a more efficient algorithm known as proof of stake (PoS) that involves only one computer being chosen at random to verify a given transaction.

"Proof of stake is a much more sensible and efficient concept. Everyone knows that PoS is the way forward and PoW will disappear eventually," Lemercier explained. 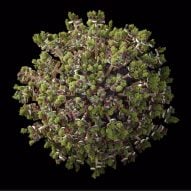 NFTs and their environmental impact were discussed during a panel talk at the Dezeen Club metaverse meet-up on 7 April. At the event, held at a virtual rooftop bar, Reisinger cautioned against condemning the nascent technology "without context".

"I always try to explain this from a historical perspective," he said. "We preferred to use the [coal-powered] train because it was useful at the moment it was created.

"Of course, it was very bad for our planet and for us. But then we started to create better solutions. Now we have better trains and we are trying to do the same with the blockchain."

"NFTs are here to stay"

Since sellers aren't required to have the copyright to a digital asset in order to mint a token for it, a number of ownership disputes have arisen in recent weeks, with Hedi Xandt, Simon Stålenhag and Derek Laufman among a number of artists whose works were sold without their permission.

Meanwhile, Kim is locked in a dispute with the rendering artist who created her virtual Mars House about who owns the rights to the asset.

But according to Lawlor, NFT marketplaces will begin putting multiple levels of safeguards in place over the coming months to mitigate these issues, including identity verification.

"This is essentially the blockchain equivalent of the blue checkmark on Twitter. That's absolutely the frontline defence and that will be the standard going forward," he told Dezeen.

Designers, too, are optimistic that these are simply growing pains of a fledgeling market.

"I do believe that these kinks will be ironed out as the market matures and improvements are made," Christodoulou said.