New York-based studio Diana Kellogg Architects looked to symbols of femininity for its design of an oval-shaped all-girls' school in India made from local sandstone.

Located in the Thar Desert in the north of India, the Rajkumari Ratnavati Girls' School was built to educate and teach over 400 girls between the ages of five and sixteen.

Diana Kellogg Architects explained that the studio looked to symbols of femininity and the nearby sand-dunes to create a fort-like structure that would blend into and grow out of the landscape.

"As a female architect designing for women, I looked at feminine symbols across cultures and specifically symbols of strength," Diana Kellogg told Dezeen.

"I ultimately landed on this oval shape that is representative of femininity and resonated with me as the formulation of infinity," she added.

"I knew I wanted to do a building that simultaneously blended and grew out of the natural landscape, much like the Jaisalmer sandstone."

These consist of a large exterior wall that wraps around the perimeter of the school, an interior wall that encloses and surrounds the classrooms, as well as an oval courtyard.

The courtyard punctuates the centre of the school and echoes the shape of the surrounding walls.

Sections of the stone walls have been perforated to cool the space down and shade it from the sun.

"I wanted the design of the school to provide shading for the girls in the courtyard," said Kellogg. "I lessened the width so we could have a canopy cover the open space in the hot months."

"The ellipse shape seemed the most natural way to do this. Round shapes were familiar to the craftsmen as the fort structure was a series of circular forms."

Wooden doors lead from the courtyard through to a computer centre and a collection of 10 classrooms that are linked by a series of winding corridors.

Clerestory openings in the classrooms create a dappled light effect throughout the day and allow for natural ventilation.

A ramp between the perforated walls forms a shaded corridor that leads up an elevated walkway to the roof.

The perforated parapet that surrounds the exterior of the walkway tapers in height. Its design is a reinterpretation of latticed Jali screens, which are traditionally used to provide privacy.

A blue tiled-mosaic floor stretches across the walkway, adding a bright and cool contrast against the yellow stone. 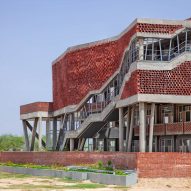 "Effective design is a process requiring a deep understanding of the history of a place – its culture, its topography and its vernacular," said Kellogg.

"I wanted to make a building about space and light and community and not about design – a structure that resonated with the soul and enforced the natural energies to nurture and heal the women and girls."

Diana Kellogg Architects oriented the building to maximise the breeze from the wind and make it work with the school's elliptical form to passively cool the building.

The studio incorporated water harvesting systems that collect and recycle rainwater throughout the school.

Solar panels that supply energy to lights and fans were fitted to a steel structure on the roof, which doubles as a shaded canopy area and playscape for the children.

"I came up with the idea of a solar-panelled shading canopy on the roof of the building – to work as a kind of old fashion jungle gym with seesaws, swings, monkey bars – the works, and even put up a screen to shield them for modesty," Kellogg said.

The school was built as a wider project commissioned by the non-profit organisation CITTA that aims to equip and support communities across the world.

Diana Kellogg is also set to build two other buildings next to the school. These will house performance and exhibition spaces, a museum and library space, as well as a women's cooperative that will teach embroidering and weaving techniques.

Elsewhere in India, Zero Energy Design Lab built this girls' hostel building with a perforated facade, while Abin Design Studio created a terracotta-brick community centre in the city of Bansberia.

Photography is by Vinay Panjwani.