Dezeen teamed up with Amos Rex and JKMM Architects on a live talk to mark the launch of a new book about the Helsinki museum.

Titled Amos Rex Art Museum – JKMM Architects, the publication explores the design of the museum's building, a 1930s structure refurbished by Finnish studio JKMM Architects that includes subterranean galleries with domes that punctuate the plaza above.

The book, published by Arvinus + Orfeus, also asks questions about the type of landmarks that galleries should be in the 21st century, how these institutions might catalyse vibrant urban cultures and who they are really for.

Carlson was joined by the former founding director of London's Tate Modern Lars Nittve, who authored an essay in the book.

Head of curatorial at London's Design Museum Priya Khanchandani and artist Karoliina Hellberg, whose work is currently on display at Amos Rex, also featured on the panel.

The talk concluded with a short video by London-based filmmaker Tapio Snellman, which showcased some of the spaces in Amos Rex.

Nittve is a Swedish writer and an advisor to museums and foundations around the world.

He is best known as the founding director of prominent art galleries such as London's Tate Modern, the recently completed Herzog & de Meuron-designed M+ museum in Hong Kong and Malmö's Rooseum Centre for Contemporary Art.

British writer and curator Khanchandani is the head of curatorial at the Design Museum in London.

Her work attempts to push the boundaries of design and uses the material environment as a lens to better understand the world. 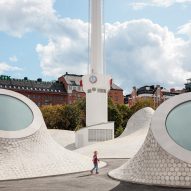 Khanchandani was the first female editor of design and architecture magazine Icon, for which she was nominated as Fiona Macpherson New Editor of the Year.

She will also be judging this year's Dezeen Awards.

Hellberg is a Finnish artist currently exhibiting at Amos Rex as part of its Between Us exhibition, in which three artists explore the relationship between fine art and the built environment.

A central motif of Hellberg's art is richly detailed interior spaces that are inspired by real and imaginary places, various visual sources and personal encounters.

In addition to Amos Rex, Hellberg's work has also featured in galleries around the world including Ásmundarsalur in Reykjavik and Galleri Kant in Copenhagen.