Canadian studio F2A Architecture has completed Malinka Gallery – an extension to a private home on a rocky ledge that was designed by the firm's founder years ago.

The house is located in Naramata, a community in the Okanagan Valley in southern British Columbia. The area is one of the largest wine-producing regions in Canada.

Built in 2003, the main dwelling was designed by Florian Maurer, founder of the F2A Architecture studio which is based in the nearby town of Penticton. It served as his personal home for years until it was sold to new owners in 2015.

Influenced by courtyards found in Latin America, the Maurer House consists of a trio of single-storey, standalone structures organised around a central garden.

"The courtyard controls privacy and views, in contrast to the typical suburban house at the mercy of its neighbours," the team said.

In 2018, the owners asked Maurer to design a small addition to hold a multipurpose space and private art gallery.

It was a tricky request. The architect never planned for the home to be expanded, and the site posed challenges.

The main dwelling had little room to grow because it sits at the edge of a rocky slope that overlooks Okanagan Lake. The courtyard wasn't a suitable spot for new construction, as it contains a septic drain field.

Working with members of his studio, Maurer decided to tuck the addition into the rocky slope and to create a low-profile building that did not obstruct the view.

The team conceived a rectangular box that is supported by slim, steel posts rising up from the site.

For the structure, the team used steel, glue-laminated timber and structural insulated panels (SIPs). Three facades are covered with stainless steel panels, as is the flat roof. 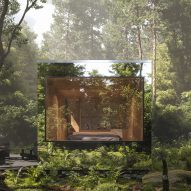 Arcana mirrored cabins will blend into the forest in Canada

A portion of the west and east walls are also glazed. On the south elevation, the team used stainless steel with a mirror finish.

"Reflecting sky and forest, it seems to float above the bedrock, fitting its grassland context gently," the team said.

The addition is connected to the main home via a tall, glazed stair enclosure – a move that stemmed from local regulations.

"The owners would have gladly accepted another small free-standing structure to match the house's original concept, but local zoning would not allow additional structures," the team said.

The stair volume is slotted into the bedrock and is topped with an overhanging roof constructed of dowel-laminated timber.

"The stair bridges from the living house to the gallery, an abstract space from which to observe the original architecture now exhibited alongside the owner's collection of paintings and sculptures," the team said.

Sparse furnishings include a streamlined, grey sofa and a tree-stump coffee table. Floor-to-ceiling glass offers sweeping views of the landscape.

Other projects in the Okanagan Valley include a winery by Olson Kundig Architects, which consists of a metal-clad structure that angles down a hillside. The building utilises the downhill slope for a gravity-flow process of making wine.

Photography is by Katie Huisman.