Named Watershed Core, the installation in Prospect Park, Brooklyn, was designed to draw attention to issues around quality, access and privatisation of water in the city.

It is part of her multiform project Public Water that includes a digital campaign and education initiatives alongside Watershed Core.

The installation is a 10-foot (three-metre) tall open-air spherical sculpture made from metal supporting restaurant trays filled with native plants.

Rainwater is collected by the sculpture, where it is cleaned by the filtration elements of plants, soil, sand, rock and a layer of carbon through a process called phytoremediation.

"Watershed Core is a sculpture that describes the geology of parts of New York City's drinking watershed through carbon, soils, rocks and plants," Mattingly told Dezeen.

"The installation filters rainwater for drinking," she continued. 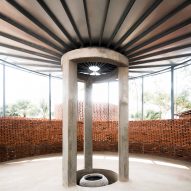 "Water moves through the trays and into the water bottles at the bottom of the sculpture. There is a backup system inside the sculpture where water from Prospect Park can be added in case of a prolonged period without rain. This system uses a hand pump and several buckets."

Watershed Core aims to raise awareness of how we can all become better water stewards in our understanding of where clean water comes from, and how it is governed.

Growing up in an agricultural town outside of New York City, Mattingly noticed how the already pesticide-polluted well that provided water to her town began to accrue more contaminates over time when it was privatised.

This experience led the artist to investigate water and its politics in America, where the country's freshwater supplies are at risk of running low due to decreasing precipitation and increasing populations.

"I've been tracking water privatisation around the US and I began working with More Art on this research in 2018. We focused on New York City's public drinking water system" said Mattingly.

"Working together, we began focusing on highlighting public water systems that we thought were working well. They were more equitable, environmental and regenerative than the private systems, or both public and private systems."

Through Watershed Core and its various other programmes, Public Water intends to share the strengths of New York's water system that over eight million people depend on daily.

"We're eager to share what steps have been taken to begin for the system to be more equitable, and look at how we can help in stewarding these watershed areas," explained Mattingly.

More Art and Mattingly have also created a self-guided walking tour that connects Watershed Core to Prospect Park's ecoWEIR, a natural water filtration system that has recently been installed to remove nutrients from the park's watercourse that lead to the development of harmful algae.

Mary Mattingly is an American artist whose work explores ecology and sustainability.

Other projects that capture water and put it to use include rain-harvesting panels designed primarily for drought-stricken cities that can be fitted onto the sides of buildings for people to catch their own water.

Photography is by Manuel Molina Martagon, courtesy of More Art.