Mando Xie imagines humanity moving into ship-like floating cities covered with trees to escape rising sea levels in this proposal, which is a finalist in Dezeen's Redesign the World competition powered by Twinmotion.

Xie imagines converting aircraft carriers to create the floating cities in his proposal, which is called Titan Art 2100.

Almost half of the surface of each city would be covered with trees to provide food and a pleasant, shaded park-like environment for citizens. A freshwater lake at the centre of the park would supply people with clean water.

A fleet of fishing vessels would accompany the Titan Ark to provide a protein-rich source of food, with LED lights along the hull designed to attract more plentiful fish.

"For the Redesign the World competition, I propose a future marine life for humanity.

"According to research, rising sea levels may lead to the displacement of up to 4.2 million Americans in the next 100 years.  A floating city could help people to continue to live safely at sea.

"The name of my proposal is Titan Ark. The idea for the design comes from large oil drilling platforms. I envision a moving platform that can sail to continue human civilization. 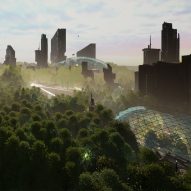 "The design is composed of two abandoned aircraft carriers. All infrastructure and homes are composed of light, prefabricated structures, with separate living areas and leisure areas. I think this is the best solution to deal with future disasters.

"Each Titan Ark is accompanied by more than ten fishing boats, which provide a source of staple food. The hull is equipped with LED lights, which can simulate moonlight at night to gather fish close by.

"Forty-five per cent of the deck area is dedicated to greenery. In the future, there will be good soilless cultivation methods. Trees will be able to grow larger, with thicker leaves, and can produce fruits in different seasons. Titan Ark is also equipped with small farms for agriculture.

"A large lake in the park can be used as a freshwater reservoir to meet people's needs for clean water."