BPAS Architects imagines building huge water-harvesting skyscrapers for humanity to survive in the desert, one of the 15 finalist projects for Dezeen's Redesign the World competition powered by Twinmotion.

Titled A New World: The Desert Faction, the project imagines a future where the Sahara Desert has expanded significantly and humans have been forced to build larger and larger communities in the hot, arid environment.

In BPAS Architects' vision, technology works in tandem with the desert environment, with energy harvested via solar panels. Water is scarce, and the faction's skyscrapers collect rainwater before it evaporates, pumping it through underground tunnels to surrounding farming areas and communities.

The water transforms the desert into a fertile landscape where crops grow, and communities flourish, eventually reversing desertification.

BPAS Architects imagines that the desert-living communities would form one of several "factions" around the world, where humanity has been forced to adapt to harsh environmental conditions.

"Not so far in the future, the human race has run its course of destruction on earth, surpassing life as we know it.

"All over the world, extreme natural phenomena have occurred, making it almost impossible for humans to live without adaptation.

"The Sahara Desert has expanded tenfold and reaches over 70 degrees during the day; the constant volcanic eruptions from the Ring of Fire in the Pacific Ocean have destroyed thousands of homes and habitats; the ocean now covers over 80 per cent of the world due to rising sea levels, and the ice caps have reached temperatures not even polar bears can survive.

"As a result, extreme natural disasters reign terror on the remaining population: droughts, tropical storms, wildfires, etc., bringing with them human problems such as soil infertility, water scarcity and famine, far greater than ever seen before. 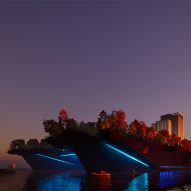 "These issues call on urgent redesign and adaptation to ensure the survival of communities across the globe.

"Using the extreme phenomena all over the world as resources, new human ecosystems are created. These are called factions and are vital for the survival of the earth.

"The main factions are Desert, Pelagic, Volcanic, Wind and Polar. Each faction works in tandem with what that part of the earth provides, creating new forms of technology that are dependent on the longevity of that natural resource, ensuring a harmonious relationship with the earth rather than its exploitation.

"The faction considered here is the Desert Faction, living in the vast wastelands of nothingness. People have fled the deteriorating and unsafe cities and set up communities elsewhere in the expanding deserts.

"The earth's surface has become so hot in this post-apocalyptic scenario that any rain that may come evaporates hundreds of metres before it touches the ground. As a result, the water harvesting skyscraper is designed.

"The new-world skyscraper reaches a height of 1000m to collect the rain before it evaporates. Once the water is collected, it runs safely through the skyscraper to underground storage. 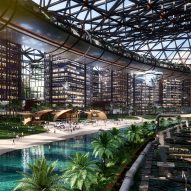 "From here, the water can either be pumped using the energy from the solar panels to the surrounding farming areas; for water, sanitation and hygiene; or the overflow water in the store runs along the underground tunnels, connecting other sporadic communities that have not received rain.

"By bringing the water down to the surface, the vast landscapes of the desert have been transformed into fertile, life-giving soil. Crops are planted, forests begin to regrow, and the surrounding communities flourish.

"Using solar panels and heat technology, the natural energy is absorbed and transformed into energy for everyday use.

"By harvesting rainwater and bringing it back to the earth's surface, communities contribute significantly to revitalizing the natural ecosystems through reverse desertification."