Thinking of using engineered timber in your project? Our latest Dezeen guide includes the most regularly used types of mass timber including CLT, glulam and dowel-laminated timber.

Mass timber is the name given to the various different types of engineered wood that can be used as structural building materials.

Developed for commercial use in Europe in the late 1980s, the materials are rapidly growing in popularity as an alternative to carbon-intensive concrete and steel that, unlike regular timber, can be used to construct tall buildings.

Mass timber can also allow quicker, cleaner assembly on site as well as being lighter than traditional construction materials. 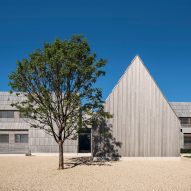 Mass timber products are composed of layers of wood joined together to form strong panels or beams. The materials are usually made in factories and engineered to precise specifications.

Timber is a renewable material capable of sequestering large amounts of CO2, as the carbon that trees remove from the atmosphere throughout their life is stored in the wood.

As a result, the material is increasingly being used to lower the embodied carbon footprint of buildings, so long as the timber is harvested sustainably. This involves replacing cut timber with new trees, which need to be left growing long enough to replace the lost biomass.

Read on to learn about the different types of mass timber:

Usually referred to as glulam, glued laminated timber is a type of mass timber that is often used for structural members.

It is constructed from layers of timber that are all orientated in the same direction. This means that large structural members can be made from smaller pieces of timber.

The structural members can be made in straight lengths for beams and columns or in curved pieces that can be used to form arched structures. Glulam is usually made from fir, larch, oak or spruce.

London studio used Maccreanor Lavington created a diamond-shaped glued laminated timber structure for the roof of the dining hall at the Ibstock Place School in Roehampton (pictured above).

Cross-laminated timber (CLT) is the best-known and most commonly used type of mass timber.

Often called super plywood, the material is a panel made by gluing layers of wood at right angles to each other. This gives it a similar appearance to plywood, but with much thicker layers, or laminations.

Due to the arrangement of the layers, the structural CLT panels have structural rigidity in two directions. The panels, which are cut to size before being assembled on-site, can be used to create structural walls as well as floors in multiple-storey buildings.

CLT is usually made from larch, spruce or pine.

Numerous CLT buildings have been built around the world with Waugh Thistleton Architects' nine-storey Murray Grove tower, completed in 2008, an early example of a timber high-rise. The studio's Dalston Lane project, completed in 2017, is one of the world's largest CLT projects.

Dowel-laminated timber, also known as DowelLam or DLT, is a type of mass timber made entirely from wood. DLT panels are constructed from layers of softwood that are connected by friction-fit hardwood dowels.

The panels are used in a similar way to CLT and are often used to construct floors and roof decks. Proponents of DLT claim it is faster and cheaper to produce than CLT as there is no need for gluing.

Neumann Monson Architects' 111 East Grand (pictured) was the first multi-story office building in North America to use DLT panels, which were combined with glulam columns.

Nailed-laminated timber (NLT), which is also called nail-lam, is manufactured from planks of timber that are placed on their side and nailed or screwed to each other to form panels.

These panels can be constructed from standard-sized and largely available planks of wood without the need for a dedicated manufacturing facility.

The material can be used for constructing floors and walls. Michael Green Architecture combined nailed-laminated timber with CLT and glulam to build a seven-storey tower in Minneapolis that, at the time of completion in 2016, was the largest mass-timber building in the USA.

Laminated veneer lumber (LVL) is a type of mass timber made from thin layers, or veneers, of timber.

The veneers, which are created by thinly slicing timber under heat and pressure, are all oriented in the same direction in a similar manner to glulam. This means the material is often used to make beams and columns, much like glulam.

British furniture brand Vitsœ used LVL to create its headquarters and production facility in the English town of Royal Leamington Spa (pictured). The company claimed the facility was the first in the UK to feature a framework made from LVL.

As its name suggests parallel-strand lumber (PSL) is a type of mass timber made from parallel strands of wood connected with glue.

The long thin strands of timber are glued under high pressure to create a high-strength material that is usually used for long-span beams or columns that need to carry large weight. Timber used to create PSL includes fir, pine and western hemlock.

This is the latest in our series of Dezeen guides. Previously we have created guides to plastic, stone, carbon and timber.