Aquastor's design was informed by research from Princeton University that shows termite mounds can prevent fertile land from degrading into arid desert by storing moisture and nutrients in their subterranean tunnels.

Much like a termite mound, the biomimicking vessel is formed from a mixture of organic and inorganic desert materials, including clay, sand, leaf litter and discarded exoskeletons.

Its hollow, water-retaining construction resembles two stacked truncated cones, with the smaller one designed to be buried in the ground. This enables it to funnel moisture deep into the soil, Fang said, while improving air circulation and lowering temperatures near the surface.

Over time, the vessel will break down completely to provide nutrients to the soil.

Taken together, he argues this creates a low-cost, low-tech, local method for supporting the growth of plant life in the world's drylands.

These make up 40 per cent of the Earth's total land surface and are increasingly threatened by desertification, due to a combination of global warming and human activities such as deforestation and unsustainable farming practices.

"While land degradation has occurred throughout history, the pace has accelerated, reaching 30 to 35 times the historical rate," Fang told Dezeen.

"I wanted to use the lowest-cost method to solve the temperature and humidity problems in the desert."

Rising global temperatures, combined with overgrazing, overfarming and extreme weather events such as droughts, floods and fires can lead vegetation in drylands to thin out and leave nutrient-rich topsoil vulnerable to being eroded by wind and water.

The degraded soil lacks the necessary structure and nutrients to support plant or animal life and struggles to retain water.

But by introducing an Aquastor vessel into the soil, which – much like a termite mound – is constructed of clay mixed with aggregates of varying sizes, Fang says the material's many micro and macropores can store water and funnel it into the ground before it can evaporate or run off.

This is possible via a hole at the bottom of the vessel, while another hole at the top allows cooler air from the vessel's sheltered interior to flow to the outside, regulating temperatures near the ground and slowing down the evaporation of precious water. 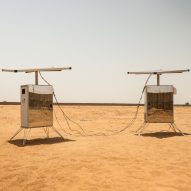 Over time, the vessel will break down and release the organic matter in its structure into the surrounding soil to feed plants.

"The actual degradation time will change in different regions but it is expected that the desertification problem in the area will be improved before the Aquastor protective belt is completely degraded," Fang claimed.

While the designer trialled the first version of the vessel near the Takla Makan Desert in northwest China, using local materials taken from the desert itself, he says the recipe can easily be adapted for different contexts.

Lined up in a zig-zag formation, the Aquastor vessels can act as "bulwarks against climate change", Fang explained, both by enriching the soil and by physically blocking it from being eroded by desert winds.

Various initiatives such as the Great Green Wall project have tried to achieve similar results by planting tree belts.

But Fang argued that the Aquastor vessel offers a more time- and money-efficient alternative.

"In desert areas where resources are scarce, a large amount of money is needed to maintain water and nutrients for a large number of trees to survive," he argued.

Aquastor has been shortlisted in the sustainable design category of this year's Dezeen Awards.

Other projects in the running include the Common Sands tiles by Snøhetta and Studio Plastique, which are made from recycled oven and microwave glass, and a "probiotic" architectural pavilion that supports living microbes.