Musicians "painted" with their instruments to create the enigmatic graphics in the centenary publication of the Latvian Academy of Music, designed by local studio Nord ID Riga.

The publication, 100 Years of the Jazeps Vitols Latvian Academy of Music, features abstract scribbles and markings printed over whole pages.

These were produced by musicians from the academy as they mimicked playing their instruments on a white sheet of paper, with their fingers were dipped in paint or taped to markers.

The resulting patterns range from scratches and scrawls to smears that resemble Rorschach tests. And readers can see how they were made by scanning the graphics with their phones, revealing process videos overlaid onto the pages in augmented reality.

Nord ID Riga wanted to embody the rhythm and vibration of music with the project, which the designers have called Stories in Sounds.

"What would we see if the act of music became visible," the studio questioned. "What strokes would musicians create if their instruments were dipped in paint?"

The designers also wanted to communicate the academy's history in a way that felt immersive and engaging while involving the staff and students in the process.

"Our challenge was to capture the Jazeps Vitols Latvian Academy of Music's story in a publication, honouring and celebrating the institution's centenary," Nord ID Riga said.

"How do you tell a story of 100 years without showing the expected historical data? How do you show appreciation for the tradition, talent and music pedagogy that has raised our countries greatest musicians?" 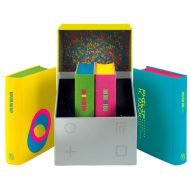 The designers ended up involving eight Latvian Academy of Music students in the work: a violist, a clarinettist, a drummer, a choral conductor, a double bassist, a pianist, a kokle player and a dancer.

The calligraphy-like scrawl on the publication's cover comes from the finger movements of the clarinettist, while the drummer's playing translated to a swirled painting and the conductor produced an endlessly looped scribble.

When a reader scans any of the eight graphics with the Overly augmented reality app on their phone or tablet, they can see the behind-the-scenes video of how it was made overlaid on the page.

The publication is tied together with a stark blue and white colour scheme, full-page black-and-white photography and spreads of large sans serif typography.

Stories in Sounds was shortlisted in the graphic design category of the Dezeen Awards 2021.

Other projects that were shortlisted in the category include a neon collection of Philip K Dick's short stories and Neue's minimal design for the Norwegian passport.