A German feminist art group has revealed a vulva-shaped spaceship concept, which it is encouraging the European Space Agency to help realise in order to better represent humanity in space and "restore gender equality to the cosmos."

The group Wer Braucht Feminismus? (WBF?), which translates to "Who Needs Feminism?", created the Vulva Spaceship concept to challenge the convention of phallic spacecraft design.

The yonic craft was designed to signal inclusivity and the group has started a petition on change.org calling on the European Space Agency to consider the project.

"The project adds another dimension to the representation of humanity in space and is communicating to the world that anyone has a place in the universe, regardless of their genitalia," said the organisation.

WBF? argues that as well as being symbolically inclusive, the ship would be "surprisingly aerodynamic" because the V-shape creates little drag as the craft leaves Earth's atmosphere – proving that there is room for non-phallic shapes in space.

"We want to restore gender equality to the cosmos," said the group.

"We dare to change the status quo in space travel: new shapes in space will revolutionize our thinking, our actions and everything we have thought to be true." 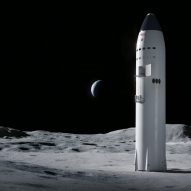 Recent tweets from WBF? include a quote from the Soviet cosmonaut Valentina Tereshkova, the first woman in space, reading "A bird cannot fly with one wing only. Human space flight cannot develop any further without the active participation of women."

The group has also been sharing historical facts about women in space travel with the hashtag #spaceisforeveryone and adopted the tagline "It's time for new symbols in space".

"Space is for everyone!" said WBF? founder Jasmin Mittag. "With our mission, we prove to the world that gender equality even has a place in space. We are not only inspiring space travel, but we're also rewriting the gender narrative."

Mittag, an artist and activist, started WBF? in 2012 to draw attention to feminist issues and inspire people to build gender equality.

The group's main project to date has been the travelling exhibition What Is Feminism Today?, which featured photographs of people holding statements reflecting on what feminism means to them.

Although most spacecraft have an elongated shape, another recent alternative is space tourism company Space Perspective's Spaceship Neptune, which uses a bulbous, onion-shaped balloon.