The four cartoonish structures, which each have a unique form, serve as accommodation for guests and staff at the Steirereck am Pogusch restaurant in the rural village of Pogusch.

They are the first four iterations of Bert, a modular structure described by Precht as a "treehouse". It was conceptualised with tiny-homes startup BaumBau in 2019 with the intention of designing a building with a minimal footprint.

Each structure is assembled from prefabricated components that were made from cross-laminated timber (CLT) in a factory offsite before being combined in situ.

Precht's co-founder, Chris Precht, recently presented the project as part of our Architecture Project Talk series in partnership with the Forest Stewardship Council.

During the event, the architect explained that Bert evolved out of an ambition to create a structure with a minimal environmental impact, but with otherworldly forms that look as though they belong in a fairytale.

"We looked at this project through the naive eyes of children, and asked ourselves, what would the building look like if it would be designed by this unfiltered imagination of a kid?" he explained.

"So building that almost comes out from a fairy tale," he continued. "But on the other hand, it also resulted in very serious questions, so how does a building that stands on a very minimal and small footprint look and work?"

Hidden in woodland at the restaurant, each dwelling is positioned on a circular concrete base with the tube-shaped modular elements stacked above them.

These modular elements contain kitchens, living spaces, bedrooms and bathrooms and are made from bent CLT, cut using a CNC machine. They were quickly built on-site over a few days.

"So, there was also a lot of learning by doing and experimenting in what is the fastest way actually to build Bert."

The modular components that make up each tree-trunk-shaped structure derive a catalogue of possible elements and configurations for Bert that Precht and BaumBau developed in 2019.

These give rise to curved forms, engineered to balance on their small footings while withstanding strong winds. Precht explained that this closely resembles "a tree in the forest", suiting their woodland setting.

The four tubular dwellings are unified by their large windows and wooden shingle-clad exteriors that are designed to weather and change colour over time.

Large round windows and balconies are intended to resemble the eyes of cartoon characters, such as those in Sesame Street or the little yellow Minions from the animated film series Despicable Me.

Inside, the Bert structures are designed to feel dark and cosy, with the structural wood left visible.

"For the interior spaces, we wanted to keep it a bit darker, to have a contrast with the wood building that surrounds the interior," Precht explained. 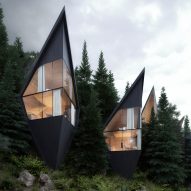 All the interior furnishings, which are also modular, are adapted to the roundness of the structures. These are teamed with black textiles and illuminated indirect lighting that appears as though it is seeping through cracks in the building.

Precht added that beyond its "​​naive and childish intentions", the project is also hoped to highlight the importance of interacting with nature to its occupants.

"Most people, especially in the future, will spend their entire lives in cities," Precht said.

"But if you going to a forest or to a mountain, you're surrounded by millions of years of evolution and I think as a person that changes your perspective. Suddenly, you are not the centre of the universe anymore, but just a very small part of, of a much larger story," Precht concluded.

Precht is the co-founder of Austria-based studio Precht, which he founded with his wife Fei Precht. The studio also recently designed The Farmhouse, a housing concept that combines residences with vertical farms.

Elsewhere, Peter Pichler Architecture has designed a proposal for treehouses in a forest in the Dolomites of northern Italy featuring sharply pointed roofs and blackened wood cladding.

The video is by Imanuel Thallinger and the photography is by Christian Flatscher unless stated.