Architecture studio BIG has unveiled its design for the National Juneteenth Museum in Fort Worth, Texas, which will commemorate the emancipation of enslaved peoples in the United States.

The mass-timber museum, which will contain galleries a business incubator, food hall and theatre, was designed by BIG's New York City studio with Black-owned architecture studio KAI Enterprises acting as the architect of record.

Set to be built in Fort Worth's Southside neighbourhood, the museum will be led by Opal Lee – an advocate who is often described as the "grandmother of Juneteenth". Lee played a major role in Juneteenth being declared a federal holiday by president Joe Biden.

The 50,000-square-foot (4645-square-metre) structure will be shaped like a rectangular tent with four gabled entrances on the long sides and two on the short sides.

The apex of the individual gables will run through the structure towards the centre, where there will be a star-shaped opening.

"Informed by the gabled rooftops that define the historic Southside neighborhood, the museum merges the historic gabled silhouette of individual homes with their protruding porches to create spaces for learning, gathering, and contemplation," said BIG.

"Meaning 'new star', the nova star represents a new chapter for the African Americans looking ahead towards a more just future," said BIG.

On the floor of the terrazzo-paved courtyard, the star will be engraved in gold, mirroring the opening above. The courtyard will have spaces to sit as well as sculptures and will be open to the public.

Two primary entrances through reception areas will connect directly to the courtyard and five additional entrances lead to other spaces in the museum.

The gabled ports on the exterior of the structure have exposed beams on the undersides.

"The mass-timber structure that defines the design's materiality continues into the interior, visually connecting the two realms," said BIG. 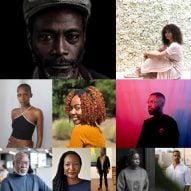 One of the primary entrances will serve as a reception area with access to a mezzanine above the ground floor.

The mezzanine will give access to the rest of the gallery spaces and have a circulation space that follows the shape of the courtyard.

Floor-to-ceiling glass will line both the ground floor and the mezzanine facing the courtyard to create a sense of transparency throughout the whole structure.

"Our engagement with Opal Lee and members of the community, to really understand their needs, is what informed a lot of the design principles," said BIG partner Douglass Alligood.

"As a Black architect, this project is one of the most rewarding experiences of my career."

Juneteenth takes place on June 19th of every year to mark the day in 1865 in which a Union general proclaimed freedom for the slaves in Texas. The date has since come to mark more generally celebration of emancipation in the United States.

Construction is set to begin on the museum in 2023. 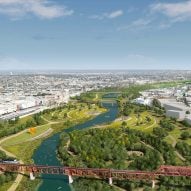 BIG was founded by Danish architect Bjarke Ingels in 2005. It has taken part in other high-profile design projects including the design of the Google's Bay View campus as well as a Passivhaus-certified furniture factory in Norway.

Other architecture in the United States that is dedicated to Black Americans include the Adjaye Associates-designed National Museum of African American History in Washington DC.

More architecture and design in Texas