Architecture and design studio Snøhetta has installed a path of stones off the coast of Norway that emerges and disappears with the tide to illustrate "the passing of time".

Located with views of Torghatten mountain in Helgeland, the stepped Traelvikosen Scenic Route installation encourages travellers to slow down and observe nature.

Snøhetta's design comprises 55 stepping stones, placed in a row along the sandy sea floor so that their visibility and accessibility change with the rising and falling of the water.

According to the studio's lead landscape architect Thea Kvamme Hartmann, the project's "main inspiration is time" and how it can be experienced in nature.

"In nature, the tide represents the core concept of time, and the ever-changing rhythm of nature itself," Kvamme Hartmann said.

"On the site, another illustration of time is the round stones formed by nature over time and placed on the sandy bottom," she continued. "By placing the square stones in line with the round stones, we wanted to spark the visitor's awareness and curiosity."

Traelvikosen Scenic Route was commissioned by the Norwegian Public Roads Administration. It forms part of the Norwegian tourist routes, which is a series of experiences for road travellers.

"Along carefully selected roads in Norway, natural wonders are amplified by art, design, and architecture, with emphasis on the unique landscape and qualities of the different locations," Kvamme Hartmann explained.

The 55 stepping stones used to create the Traelvikosen Scenic Route were the exact number required to connect the shore to a small islet, allowing visitors to jump to solid ground on both ends.

Each one is fully visible at low tide and completely submerged at high tide beneath the clear water of the Norwegian Sea.

The steps are made from granite sourced from a local company, chosen as its appearance complements other rocks in the area.

Snøhetta designed the square steps with a width of 500 millimetres to make the pathway as narrow as possible while enabling two people to pass each other.

This also allowed the studio to create spaces between each slab so that visitors can look down into the water while safely walking across them.

"We wanted the distance to be enough that you need to look down and concentrate when you walk, ensuring focus shifts to what is below and around you," said Kvamme Hartmann.

"To ensure it all worked as intended, we even did a 'jumping test' with the oldest person in our studio, and that helped us confirm that it would work for all age groups." 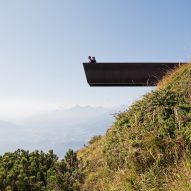 According to the Snøhetta, while encouraging passersby to slow down, Traelvikosen Scenic Route is also hoped to "ignite new reflections on nature itself and how we take care of it for the future".

"If we truly want to take better care of our nature, we also need more people to see and learn more about it," explained Kvamme Hartmann.

"At Trælvikosen, we wanted to intentionally design the site to ensure visitors were enticed to stay longer than normal," she continued.

"To truly experience the details, the time and nature itself, and hence also understand it better, as it offers an opportunity to observe the ever-changing rhythms of our nature."

A similar concept was behind Snøhetta's design of Under, an underwater restaurant that it created in Båly three years ago. While creating a unique experience for visitors, it is also hoped to encourage them to learn about marine life by observing it up close.

The studio recently released new photos of the building, now that it is covered in marine life and functioning as an artificial reef.

Other recent landscape architecture projects by Snøhetta include a cantilevered viewing platform made from weathering steel, which forms part of the Perspektivenweg walking trail in the Austrian Alps.

The photography is by Snøhetta/Ivar Kvaal.