British practice Invisible Studio has created a yoga studio with rammed-earth walls and a roof clad in copper shingles at The Newt in Somerset hotel in England.

The yoga studio is the third building at the hotel designed by Invisible Studio, which is headed by architect, university lecturer and television presenter Piers Taylor.

Set within the hotel's vegetable garden, the studio has a similar material palette to the practice's two previous structures on the site – a gymnasium and a lakeside apiary and exhibition space called the Beezantium.

It was created to provide a dedicated space for yoga classes, which were conducted in the Beezantium before it was fitted out for its intended purpose.

The building is positioned behind the gym, which features a 15-metre-long window that immerses visitors in the garden setting.

In contrast, the yoga studio has a more insular design with a single opening located at the apex of the sculptural roof.

The yoga studio and gym are both constructed using the same rammed earth, which is made from local limestone that gives it a distinctive reddish hue.

Copper tiles on the roof complement the slate on top of the estate's existing buildings, including several listed structures.

The curving form of the roof is similar in shape to that of the Beezantium, which was designed to reference the follies that have been created in English formal gardens for centuries. 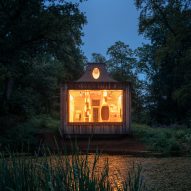 Inside, the studio has a pared-back interior clad almost entirely with beech slats, excluding a wall lined with full-height mirrors. The architect said this helps to create "a warm and immersive sanctuary-like space".

The wooden slats extend up from the walls onto the curved inner surfaces of the ceiling, drawing attention to the frameless rooflight that provides a view of the treetops and sky from within the space.

Invisible Studio operates from a self-built studio in a working woodland near Bath, where it has erected several structures including a low-cost micro-home made from wood and scavenged materials, and a model-making workshop featuring a timber frame clad with fibreglass panels.

In addition to its work at The Newt in Somerset, the practice's recently completed projects include an arts centre with an ad-hoc aesthetic in Somerset and an outdoor pavilion built by students at the University of Reading.