University of Virginia researchers have invented a method of 3D printing with seed-impregnated soil, which could be used to create walls and roofs teeming with plant life.

Prototypes built by the researchers start off looking like ordinary raw-earth structures. But over the course of a few days, they sprout and become covered in greenery, leading the University of Virginia (UVA) to compare them to "oversized Chia Pets".

Building elements such as green walls and roofs could be constructed using this method, bringing benefits like natural insulation, flood prevention and green spaces for people, pollinators and other animals, according to UVA.

By combining soil and seeds into 3D-printable "soil inks", greenery could be built into the very fabric of architectural features rather than just layered on top.

This has the potential to reduce the need for more emissions-intensive building materials and replace them with a circular alternative, which the researchers say can be can be reused again and again.

"We are working with local soils and plants mixed with water," said Ehsan Baharlou, an assistant professor at UVA's School of Architecture. "The only electricity we need is to move the material and run a pump during printing."

"If we don't need a printed piece or if it isn't the right quality, we can recycle and reuse the material in the next batch of inks."

Buildings made with this technique have the potential to be carbon neutral or even carbon negative, as their plant covering would draw down carbon dioxide from the atmosphere.

"This method hypothesises to create an active ecological system that might store emitted carbon in 3D-printed soil structures through the process of photosynthesis," Baharlou told Dezeen.

Initially, the UVA researchers used their method to create a series of small, self-supporting structures that resemble beehives and published them in the journal Additive Manufacturing.

At that stage, their goal was to create structures that were solid enough to stand by themselves while also providing enough moisture and nutrients to support seed germination and seedling growth.

For the seeds, they chose to use stonecrop – a succulent plant that can survive with little water – as the extrusion process makes the soil compact and dry. 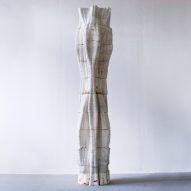 The researchers have since started printing larger objects such as low walls about a metre in height. Next, they will look at mounting the 3D-printing system on a moving robot that could enable the production of taller, more complex structures with multiple sides.

For this upcoming stage, the researchers will have to further develop the formula for their "soil inks" as they predict that the extra height will exacerbate problems such as soil cracking.

The researchers also plan to experiment with using multiple material layers within a wall panel, allowing the dry inner wall to be insulated from the moist outer wall.

Other efforts to create living architecture through 3D printing have come from London-based Blast Studio, which has mixed mycelium with paper pulp to create an architectural column that can sprout mushrooms.

The photos are by Ehsan Baharlou unless otherwise stated.