"One thing that we've noticed recently is that there is a scarcity of industrial and furniture designers," said designer Jay Osgerby, co-founder of Barber Osgerby.

He noted that students who traditionally would have studied furniture design are now more likely to go into digital industries, such as video game design.

"We've noticed over the years, we used to have so many CVs through the door, and they've almost completely stopped now," added Barber Osgerby's other founder, designer Edward Barber.

"We feel it's important now more than ever to actually study those things and be the next generation," emphasised Osgerby.

The discussion took place at Fredericia's London showroom on 21 September and was moderated by Dezeen's deputy editor Cajsa Carlson. The panel was made up of Barber Osgerby and Rasmus Graversen, head of design at Fredericia.

The event celebrated the launch of Fredericia and Barber Osgerby's Plan collection, a series of chairs and tables designed for working and living.

Speaking on the process of collaborating with Fredericia, Barber discussed how he and Osgerby had looked toward the brand's design heritage when creating the pieces.

Barber noted that Fredericia's iconic J39 chair, created by Danish designer Børge Mogensen, was a particular point of inspiration during the creative process.

"I have to say I've had the J39 chair for years and years," Barber said. "What I've always loved about it is that it has this very straight architecture to it."

"There's no sort of curves or leaning legs," he added. "And so I think it'd be fair to say, Jay and I borrowed from that architecture for this chair."

"There's a commonality there, but a transference of materials, from oak to steel, and stainless steel," added Osgerby.

The Plan chair is made up of a steel base, with options for a plywood or upholstered seat. The chair partners with the Plan table, a simple four-legged table featuring an oak tabletop and brushed steel frame.

"When I came into the showroom today, I was so happy because it felt like [the collection's] always been here – but at the same time that it's completely new," said Graversen. "I think there's this mutual respect for the end product".

Sustainability needs to be accessible and easy to take part in

The speakers also discussed the importance of incorporating a realistic approach to the product's lifespan when designing sustainable pieces. Barber discussed how designers need to make it easy for users to take part in circular processes.

"It's all very well to have it disassembled by yourselves, but that's never going to happen, they'll chuck it somewhere," he said.

"So it has to be easy for someone who doesn't know the chair to take the pieces apart and recycle it." 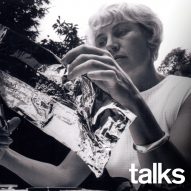 "We would like to make products that we can send on their own journey," added Graversen.  "Something that will have a very long lifespan".

"We introduced some new things like upholstered elements, and things can happen to upholstery which is not the same as what you can do with wood," he added.

"So we needed to look into a more circular way of doing the components. You can have it refreshed, or you can purchase a new substitute, so it's prepared for [a] circular [life]."

"There's a difference between what [Fredericia] has done and what most manufacturers did," noted Osgerby. "[With this collection], should something break or get damaged, you can just order that part, it's really unusual."

Fredericia is a Danish furniture brand founded in 1911. The company has produced work by iconic Danish designers such as Mogensen and Nanna Ditzel, as well as the work of contemporary designers such as Jasper Morrison.

This talk was filmed by Dezeen for Fredericia as part of a partnership. Find out more about Dezeen's partnership content here.