After Seratech's carbon-neutral cement won the 2022 Obel Award, Dezeen has rounded up six ways in which researchers are working to decarbonise concrete – the single most polluting building material in the world.

Currently, concrete's key ingredient cement is responsible for around eight per cent of global emissions, surpassing all other materials except oil, gas and coal.

But as the world – and the Global Cement and Concrete Association (GCCA) – race to reach net-zero emissions by 2050 to avoid the worst effects of climate change, a growing number of material innovations are emerging to tackle concrete's carbon footprint.

Mostly, these focus on finding low-carbon substitutes for cement, making use of everything from algae-grown limestone to olivine – an abundant mineral that can absorb its own mass in carbon dioxide. 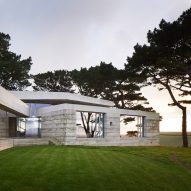 But none of these alternatives is currently available at the necessary scale to reach net-zero emissions by mid-century, according to Cambridge University engineering professor Julian Allwood.

"Despite the enormous range of innovations in cement that are being publicised, there are no substitutes with all the same performance characteristics and scale as Portland cement," Allwood said in a speech at the Built Environment Summit.

To help buy the construction industry time to scale up viable alternatives, other researchers are looking at slashing the embodied carbon footprint of buildings by developing clever construction techniques to reduce the amount of concrete needed in their construction.

Below, we've rounded up six of the most innovative projects across both approaches:

London start-up Seratech has developed a way of creating carbon-neutral concrete, which involves replacing up to 40 per cent of its cement content with a type of silica made from captured industrial emissions and the carbon-absorbing mineral olivine.

All of the emissions associated with the remaining cement are offset by the CO2 that is sequestered by the silica, the company claims, which would make the material overall carbon neutral.

The cement substitute is both low-cost and easy to scale, Seratech says, because it can be integrated seamlessly into existing production processes and because olivine is an abundant material – unlike other cement substitutes like ground granulated blast-furnace slag (GGBS).

Find out more about Seratech ›

Biogenic Limestone by Minus Materials

When this "biogenic limestone" is burned to make cement, it will only emit as much carbon as the microalgae drew down from the atmosphere during its growth, which researchers say makes the process carbon neutral.

If the ground limestone, which is typically added to the cement mixture as a filler, is also replaced with the algae-grown alternative the material could even be carbon negative, as the carbon stored in the aggregate would be sequestered instead of burned.

Supported by a $3.2 million (£2.7 million) grant from the US Department of Energy, the researchers are now working to scale up their manufacturing capabilities, while lowing the price of the material by also using the coccolithophores microalgae to make more expensive items like cosmetics, biofuels and food.

Find out more about Biogenic Limestone ›

As part of the ACORN project, researchers from the universities of Bath, Cambridge and Dundee have developed a thin-shell vaulted flooring system, which can be used to replace traditional solid floor slabs while using 75 per cent less concrete to carry the same load.

This resulted in an estimated 60 per cent reduction in carbon emissions for the team's first full-scale demo project, built inside Cambridge University's Civil Engineering Department.

"Since concrete is the world's most widely consumed material after water [...] the easiest way for construction to begin its journey to net-zero is to use less concrete," said ACORN principal investigator Paul Shepherd from Bath's Department of Architecture and Civil Engineering.

Made using an automated manufacturing system and a six-axis robot, the flooring also functions completely without reinforcements, eliminating the need for emissions-intensive steel rebar.

Montreal-based Carbicrete is among a number of companies making use of waste slag from the steel industry to completely eliminate the need for cement in the concrete production process.

Instead of the water used in traditional concrete production, this cement substitute is then cured with captured CO2 from factory flues, which is sequestered in the material to make it carbon neutral.

However, this process can so far only be used to make precast panels and concrete masonry units. And due to the limited amount of steel slag produced every year – around 250 million tonnes compared to four billion tons of cement – Carbicrete could only be used to meet a fraction of the demand.

Find out more about Carbicrete ›

On a smaller scale, London design studio Newtab-22 has developed a concrete-like material made using waste seashells from the food industry, which are ground up and combined with a patent-pending mix of natural binders such as agar.

Called Sea Stone, the resulting material looks strikingly similar to real concrete since the oyster and mussel shells it contains are made from calcium carbonate, otherwise known as limestone – a key ingredient in cement.

But as the material is not fired, it lacks the strength and durability of real concrete and is restricted to non-structural applications, including surfaces such as tabletop and tiles as well as plinths and vases.

Find out more about Sea Stone ›

Another technique for using less concrete comes from researchers at ETH Zurich, who have developed a system of 3D-printed formwork elements. Made from recyclable mineral foam, these can be placed inside the moulds used to make pre-cast concrete panels, creating a pattern of hollow cells throughout the slab.

The formwork creates an internal geometry, which was optimised to reinforce the panel along its principal stress lines and provides the necessary strength to create everything from walls to entire roofs, while drastically reducing the amount of concrete needed in the process.

This creates panels that are lighter and use 70 per cent less material. And after curing, the mineral foam can either be left in place to provide insulation or endlessly recycled to create new formwork elements, which ETH Zurich says makes the process potentially zero waste.

Find out more about FoamWork ›