A network of autonomous cable cars transports people and goods around a city in this concept developed by transport design studio Half Company.

Halfgrid is a proposal for a city-wide transport system that uses artificial intelligence (AI) to move suspended capsules to their designated location.

It is billed as "a fully autonomous transit system for people and goods, running on a separate layer above the ground and based on the smallest unit possible — an individual person-sized pod".

Half Company founders Martin Angelov and Mihail Klenov are best known for designing and manufacturing the Segway-like Halfbike after raising almost $1 million on Kickstarter in 2015.

The Sofia, Bulgaria-based designers have not worked on an infrastructure project of this scale before, although they did bring their previous concept – a system of elevated bike lanes supported on steel cables – to life as tourist attractions in Bulgaria and the Philippines.

The duo believes that Halfgrid could be a game-changer for cities that suffer from road traffic congestion.

Unlike a traditional cable car, the system uses static cables. Instead, it is the capsules that move along the tensioned steel ropeways, meaning each unit can travel freely on different routes.

A centralised AI system would control the movements of all capsules. Robotic devices would carry them along the line, while others would facilitate boarding and disembarking.

Angelov claims the system could realistically be implemented in an existing city if it was developed gradually.

"We're makers, so we never try to create things we can't imagine how to realise," he told Dezeen.

"If only a few main lines are developed in a city initially, it would be enough to see if it works well," he said. 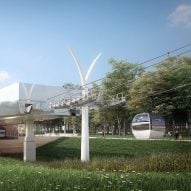 To take a journey, passengers would select a pick-up point and destination in the Halfgrid app, then simply wait for their capsule to arrive.

Goods deliveries would work in a similar way. Couriers would be able to bring deliveries direct from a warehouse depot to its delivery destination, removing last-mile delivery issues.

"This will eliminate the need for much of the truck transports in city centres," said Angelov.

A key benefit, according to the designers, is that the system would be "practically silent", so could reduce the level of noise pollution in a city.

Half Company is planning to create a prototype of the system with a few capsules, with the ambition of find a partner to help it develop the project further.

"We hope to be able to involve a municipality of a big city at the next stage," said Angelov.

Other proposals for city-wide transport infrastructure include PriestmanGoode's drone delivery system and the Non-Emergency Medical Transportation devised by Jens Martin Skibsted and Manyone.