Although both bottles are designed to recall Asian stupas – domed structures that house the remains of Buddhist monks – the Range Rider is angular, with clean lines, while the Purple Sage is formed of rounded shapes stacked on top of each other.

"I am fascinated by Egypt and by the stupa shapes found in Asia, especially in Tibet, Thailand, Sri Lanka, Burma, China and Japan," Turrell told Dezeen.

"Their architectural structure, like that of the pyramids, makes them monuments of high spiritual value in which light plays an essential role," he added.

Turrell, who is known for his manipulation of light in large-scale installations such as the Green Mountain Falls Skyspace, hoped that the prismatic bottle shapes would diffuse and diffract the light, showcasing the shine of the crystal. A limited run of 100 bottles was created.

"I used this as inspiration for the design of the bottles, which had to contain the light and yet allow its slight colouring to shine through," said Turrell.

"These are genuine works of art, entirely handmade, with pure geometric shapes in polished coloured crystal," he continued.

Both bottles, which weigh 8.4 ounces each, were manufactured in Lalique's factory in Wingen-sur-Moder, Alsace, and have been engraved with Turrell and Lalique signatures. 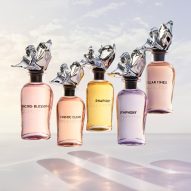 According to the brand, a major challenge in the production process was ensuring that the crystal was the same thickness all around. Differences in thickness would result in different hues.

"During the hot production process, the pyramid and the half-sphere had to be made in a cup-like mould, which was pressed with a core to obtain crystal of a uniform thickness, to ensure the required homogeneity and density of colour," Lalique explained.

Turrell also collaborated with Lalique to create the scents and to create a wooden box for each that matches the silhouettes of the perfume bottles.

"As for the scents, I wanted to find the smells of the Colorado Plateau, and particularly that of purple sage, whose magical charm is described in Riders of the Purple Sage by Zane Gray, the legendary master of the western," explained Turrell.

"For me, this very evocative fragrance is a combination of scents – purple sage and old rubbed leather – the same ones that cling to our chaps when my wife Kyung and I return to our ranch," he said.

"This is how the first Range Rider fragrance was born," he continued. "The second, Purple Sage, is the version for women."

Images are courtesy of Lalique.