Dubai-based Studio N has created a lighting scheme to emphasise the natural materials used in the Sensasia Stories Spa designed by interiors studio Roar in the Kempinski Hotel Mall in the UAE.

As the spa has no natural light, Studio N focussed on highlighting the variety of materials used in the space, which includes grey slate, stone, wood and hessian wallpaper.

"We were very conscious of how we illuminated each of the different surfaces and how light could help emphasise the natural characteristics of materials", the studio told Dezeen.

Overall the studio aimed to meet spa lighting guidelines while maintaining a calm and peaceful atmosphere in the space.

As the Sensasia Stories Spa is located in a busy mall, the lighting designers wanted the entrance space and reception area to act as a calm area of transition from retail to spa environment.

Concealed low-power and high-lumen LED lights were used to create a soothing environment, with under-counter lighting used for soft, ambient light in the the reception.

The 270-square-metre spa contains eight treatment rooms, along with an ice fountain, herb saunas, steam rooms, and pool, that are arranged around a central courtyard.

Strip lights were integrated into the pool's stairs and, in other areas, smaller lights and decorative light fixtures were used to create illuminated accent walls.

A recessed gobo projector was used to replicate the movement of water, which the studio said was "a subtle reference to the natural world". 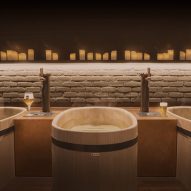 The studio used recessed wide-beam pinhole downlights to provide general lighting to the space in a minimal style.

Studio N is shortlisted in the architectural lighting design category at the Dezeen awards 2022 alongside Liftshutz Davidson Sandiland and Leo Villareal's Illuminated River installation and a theatre venue clad in luminous tiles in China, by Brandston Partnership.

The photography is by The Oculis Project.