Automotive manufacturer Volkswagen has developed a five-wheeled office chair prototype that uses the same technology found in its electric vehicles.

The nameless model chair was designed by Volkswagen Norway's Commercial Vehicles department to help users feel like they are in an electric Volkswagen car, with a horn, seatbelt and hi-fi music system to boot.

"The chair is designed to give those who work in an office a feeling of what it's like to have a car from Volkswagen Commercial Vehicles as your workplace," said Volkswagen.

"You can drive, honk and listen to music – even signal as you take a turn into a meeting room," the brand added.

Closely resembling a traditional gaming chair, the office chair has a top speed of 20 kilometres per hour, which is similar to most electric scooters. It is charged using a detachable battery that can cover up to 12 kilometres on a single charge.

Instead of a steering wheel, the chair has two pedals that users can move with their feet to change direction.

LED strip lights along the armrests help users signify when they are changing direction in the workplace and two red break lamps make for safe office riding.

Meanwhile, a touchscreen display shows a rear-view camera and 360-degree sensors alert users to any obstacles.

"With the headlights you can brighten even your darkest overtime evening, and if an office party suddenly breaks out, you'll quickly be the center of attention and create a very, very cool vibe with the chair's office party lights," explained Volkswagen.

"With office assistance like a rear-view camera and 360-degree sensors, you're fully aware of all threats and potential disturbances." 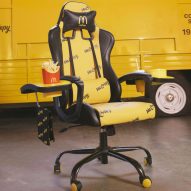 Although the office chair won't be going into production, users can take the model chair for a test spin at dealerships and events throughout Norway. While driving, they can play pre-selected "road trip" music through the hi-fi system.

Other features more commonly found on cars include four-inch-thick aluminium rims around the wheels and a pedal steering system.

For savvier office workers, there is a 0.005-cubic-metre trunk at the rear, which Volkswagen claims is "perfect" for storing office equipment including laptops, paper reports and notebooks.

Elsewhere, the silver Volkswagen "VW" logo is knitted into the headrest and wheels, matching the silvery metallic paint on the chair's exterior.

Many brands are capitalising on the growing demand for quirky chairs in offices and homes.

Most recently, McDonald's launched a limited edition "ultimate gaming chair" that allows users to snack and play games at the same time, while Swedish furniture brand IKEA collaborated with popular hardware brand Republic of Gamers on a furniture collection suitable for PC gaming.

Images and video are courtesy of Volkswagen Norway.