Royal College of Art (RCA) graduate Oluwaseyi Sosanya has designed a loom for 3D weaving and used it to create a shoe sole, presented at the institution's annual degree show (+ movie).

The 3D Weaver was designed by Nigerian American designer Oluwaseyi Sosanya for his The Structure of Protection graduate project. 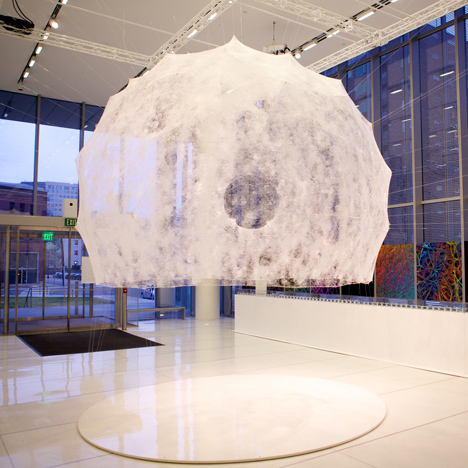 Silkworms and robot work together to weave Silk Pavilion

Sosanya has a patent pending on this technology, which feeds yarn through two tubes and wraps it around a grid of vertical poles – as demonstrated in the movie above, filmed by Zuzanna Weiss.

The machine relies on a similar layering process to 3D printing, but with an extra step to hold the structures together without a binder.

"I looked at a few different machines when designing this one and got most inspiration from a sewing machine and an industrial knitting machine," said Sosanya. "Both of these machines allow thread to move freely through the mechanics using springs and guiding to hold the tension."

"With the 3D Weaver, once the first row is layered, the thread maintains its tension, due to guide tubes and a initial winding of the thread programmed to run before the weaving of each structure. I coded a bit of software that allows any solid geometry to be split into layers and woven."

To demonstrate the capabilities of the machine, Sosanya has woven a shoe sole made from one continuous thread, working in collaboration with footwear designers Lixian (Lisa) Teng and Tomiwa Adeosun.

The sole is woven from natural fibres including cotton, wool and paper, and then dipped in silicone to maintain the structural properties.

"The reason for using the materials I have chosen was to keep flexibility in the pieces," the designer told Dezeen. "Their behaviour is solely dependent on the structures. Both thread and binder work together to hold the structure. A continuous fibre running though the piece provides more stability with less mass."

"I looked into structures found in nature and auxetic structures were a big influence in the development of the zigzag structure."

Auxetic structures are defined as those which, when stretched, become thicker perpendicular to the applied force.

The shoe soles have been created to give the process a commercial application, but Sosanya believes that applications for the technology could range from medical implants to architectural structures.

"I have been looking into threads and structures for filtration and air purification," he said. "I am developing more technical materials for helmets and stab proof vests – I am currently working on a material that I hope will address several of the issues caused by body shape that surround stab resistant vests worn by female British law enforcement officers."

The project is on display as part of the Innovation Design Engineering at Show RCA 2014, which continues until 29 June. Other projects at the exhibition include a seating system can be twisted and folded to create endless shapes, and a flexible and reusable packaging system for valuable goods. See more projects from Show RCA 2014 »

Photographs are by Guillaume Couche.