Intricate drawings by Bartlett School of Architecture graduate Anja Kempa present a vision for how spring could be recreated in Tokyo, once cherry trees fail to blossom because of climate change.

Remembering Spring forms Anja Kempa's MA graduate project from the Bartlett School of Architecture, and looks at how Japanese traditions that are being eroded by climate change can be recreated.

"Remembering Spring is assuming that with climate change and seasonal shifts, there is no spring, because the cherry blossom are not blooming. So it's looking at how you recreate the season if the season does not exist," Kempa told Dezeen. 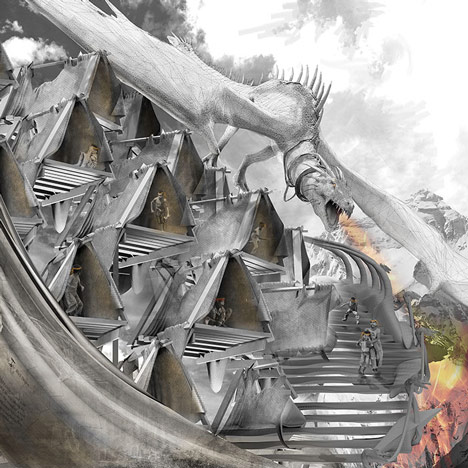 In the drawings, roads are turned into fields for growing rice, and straw from the rice is converted into bio-fuel in nearby towers, using the same process for making sake. The rice straw is also used to make paper, which geisha turn into origami cherry blossoms and scatter around the city to mark the beginning of a new artificial spring.

"Being made of rice straw, the cherry blossoms also act as a natural fertiliser for the new rice, and so the cycle begins again," explained Kempa. "The calendar moves back to its agrarian origin as a farming year, but in a way that is applicable to modern society."

The setting for the series of drawings is the ward of Chiyoda – the cultural and historical heart of the Tokyo and home to the Imperial Palace. It starts with an aerial view of the city and then zooms in to depict more detailed scenes.

In one picture, giant koinobori fish made from rice paper float above the city like clouds to deflect heat and provide shade for the rice fields below. In another, families mark the beginning of the new artificial spring by gathering under inflatable trees that work like gasometers, filling up as bio-fuel is produced.

"The new cherry trees are an indicator of the fuel produced by the garden, and people gather under these trees of technology, rather than actual blossoms. It's representing what the tradition could become," explained Kempa.

Another drawing shows a bonsai garden, where miniature versions of extinct plants are preserved for future generations. "It's like a seed bank, but with bonsai trees," said Kempa.

Geisha oversee the various processes, working in distillation chambers to create bio-fuel and monitoring the rice fields. "The geisha traditionally always controlled nature, whereas the samurai were more like warrior and political figures. So the geisha becomes like new samurai for the city," said Kempa.

While fantastical, Kempa insists the drawings relate to current issues. "They are presented in a fantastical way, but relate to the near future – it's a tangible future," she said.

"The cherry blossom is already not blooming, and the authorities in Tokyo have presented an initiative to bring green areas back to the city, moving outwards from the Chiyoda ward. So all of the things in the drawings could be considered a proposal for the current initiative. It's all things that they are worrying about now."

Anja Kempa completed Remembering Spring as part of the Bartlett's Unit 10 – the drawing unit led by architect CJ Lim. She received a distinction for the project.