German artist Tobias Rehberger has patterned a British warship with distorting black and white graphics to mark the centenary of the First World War (+ slideshow). 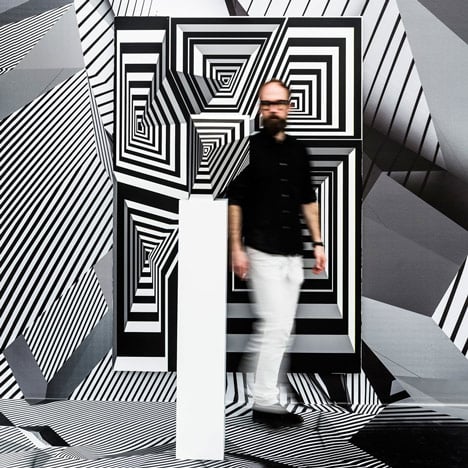 The HMS President was built by the UK's Royal Navy in 1918 for anti-submarine warfare and is one of the last three surviving warships of its kind.

Dazzle camouflage – also known as dazzle painting – was used during the First World War to optically distort the appearance of ships to make it harder for submarines to track their course.

Recreating the visual technique, Rehberger designed a print of pipework viewed from different perspectives that completely covers the boat.

The principle was first introduced in 1914 at the start of the war by British scientist John Graham Kerr and its use increased significantly in 1917 after heavy losses of British merchant vessels to German submarines.

HMS President would have originally been decorated in this way, along with other Flower-class anti-submarine escort ships.

The vessel is moored near Somerset House at Victoria Embankment, on the north bank of the river.

The project was co-commissioned by Chelsea College of Art and Design, Liverpool Biennial and Tate Liverpool as part of the 14-18 NOW series of artworks.

Rehberger often references the dazzle camouflage style in his work, and has previously covered the interior of a temporary New York bar with similar patterns.