German designer Katharina Gross has dipped brass boxes into a molten wax mixture to create a series of tables with stalactite-like legs (+ slideshow).

Katharina Gross created her own recipes for wax after experimenting with different applications for the material. 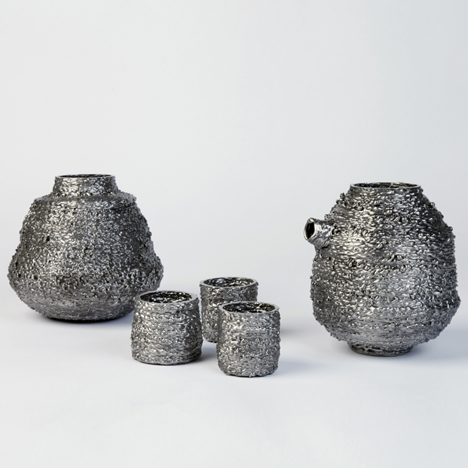 During the Waxploration project, she mixed a strong, durable variant that includes marble dust and used it to create a series of furniture in the same way that candles are made.

Perforated brass sheets shaped into boxes are dipped into the molten wax mixture to form the Paris series of tables.

"The thought behind it is to use the process of candle making," Gross told Dezeen. "Instead of a wick I dip in the whole box, and it creates this stalactite look."

Before they dry, the boxes can be stacked on top of each other so they fuse together when the wax solidifies.

The columns formed as the drips of wax harden act as legs for the tables or provide a bumpy surface when flipped over.

The tables can be fully immersed in the wax or submerged halfway to leave a portion of the brass uncovered.

Gross also created a set of tables from bent acrylic sheets, which have holes laser cut into the surfaces. When covered in the wax these objects take on an appearance of oversized pieces of cheese.

She believes the material has several benefits for use in furniture design. "I think its strength is that you could simply melt it down again and reuse it for new furniture," she said.

"It does not melt as easy as you would expect," she continued. "Its is not fragile. If you would scratch it – which is also not that easy – you could simply use a heat gun and it would go back to the way it looked before the scratch. You can't really do that with other materials."

Another designer using wax to form unusual products is Bart Hess, who created a series of dresses by dunking people into a pool of the liquid during an installation at last year's Lisbon Architecture Triennale.