News: these new images by Foster + Partners reveal a pair of skyscrapers proposed by the firm for San Francisco's rapidly developing Transbay area.

The project will take over seven parcels of land between First Street and Mission Street as part of the Transbay Plan – a rezoning strategy brought in to encourage new buildings on sites surrounding the new Transbay Transit Centre development. 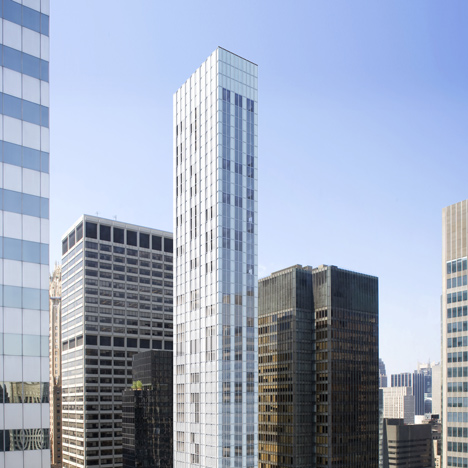 "The First and Mission towers are incredibly exciting in urban and environmental terms – bringing together places to live and work with the city's most important transport hub, the project further evolves a sustainable model of high density, mixed-use development that we have always promoted," said Norman Foster.

Described by Foster as a "symbol of this new vertical city quarter", the largest of the two skyscrapers will match the height of the nearby Transamerica Pyramid – currently the city's tallest structure.

"The super-sized office floor plates will give tenants a high degree of flexibility, and their open layout is supported by an innovative orthogonal structural system developed for seismic stability," said Foster.

"The point where the towers touch the ground is as important as their presence on the skyline," added Foster. "At ground level, the buildings are open, accessible and transparent – their base provides a new 'urban room' for the region and the new pedestrian routes through the site will knit the new scheme with the urban grain of the city."

The First and Mission project is a joint venture between San Francisco property developer TMG Partners and real estate firm Northwood Investors. It is one of several towers going up in the area, on plots sold by the city to fund the $4.2 billion Transbay Transit Centre project.

"The Transbay site will be transformative and will be the last mixed-use development of this scale in this area of downtown," said TMG Partners president and CEO Michael Covarrubias.

Heller Manus are also working on a 52-storey tower at 181 Fremont Street, while OMA has unveiled a 167-metre skyscraper for Folsom Street and Studio Gang has designed a 250-metre-tall building known as Aqua Tower.