All the items for sale at this east London corner shop run by designer Lucy Sparrow are made from felt (+ slideshow). 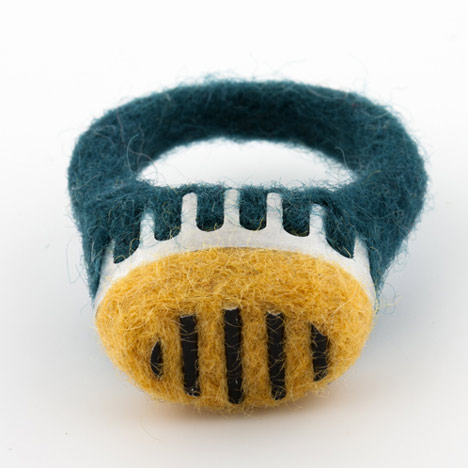 "The Cornershop grew out of an idea to create an art installation that would be overwhelming to people visiting," Sparrow told Dezeen.

She spent eight months creating the items, cutting the pieces of felt and stitching them into items typically found in a British corner shop.

"There are canned goods, alcohol, toiletries, frozen foods, iced lollies and ice creams, chewing gum, confectionery, tobacco products and newspapers and magazines," said Sparrow, who posted a full inventory on her blog. "Almost anything you can think of, really."

Branding on the products is recreated using stitching, fabric paint or bubble paint – which expands when heated to create raised details.

Lycra and clear plastic are used to complete the effect, but Sparrow says that over 90 per cent of the installation is felt.

"I chose felt because it's a naive, almost childlike material that everyone comes into contact with at a young age when first they start to sew," she explained. "It's a very forgiving fabric that's approachable and is available in a huge range of colours."

"It was just the right material to give the pieces saturation, stroke-ability and a uniform appearance," she added.

The products are installed in an abandoned corner shop at 19 Wellington Row, which closed like many similar enterprises around the UK as shoppers took their business to larger supermarkets.

"[The corner shop] is something that's disappearing with the growth of supermarkets, and the loss of the corner shop has adversely impacted our high streets and communities," said Sparrow. "I hoped that this project would remind people just how much the corner shop cemented life in local communities."

The project, which was partially funded on Kickstarter, also includes sewing workshops for children and people with neurological disabilities.

"The Cornershop is a tactile project and I felt it was important to create some art for communities that normally find themselves excluded from mainstream art," Sparrow said.

The Felt Cornershop will be open until 31 August.