Briefed to design a holiday home that feels like a campsite, Australian studio Dunn & Hillam Architects has completed a residence in New South Wales based on the old "dogtrot houses" of the American deep south (+ slideshow).

Dunn & Hillam Architects were asked by a family to create a permanent structure that would capture all the details they loved about camping – from the open fire to bathing outdoors – on a creek-side site near one of their favourite campsites.

"Their brief was everything they loved about camping without the pack up at the end of every holiday: a permanent, civilised campsite," said studio co-founder and architect Ashley Dunn. 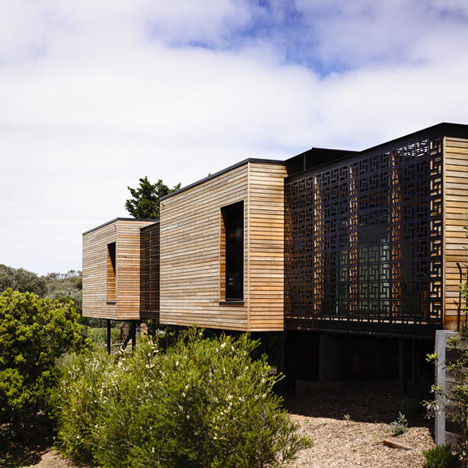 The house is formed of two asymmetric cabins positioned alongside one another, with an open-air corridor running east to west in between.

This structure inspired the name Dogtrot House, which makes reference to the log cabin residences common in south-eastern America throughout the 19th and early 20th centuries.

These homes were characterised by a central "breezeway" that typically separated living and sleeping areas from a dining room and kitchen.

"During the evolution of the design for the house I was re-reading To Kill a Mockingbird, which made reference to the vernacular dogtrot houses of the American south," explained Dunn.

"The name comes from when the 'old dog was too hot to trot' – the covered breezeway provided the perfect escape from the heat of the day. We realised with some joy that this is what we had," he said.

One side of the single-storey building accommodates the family living room and kitchen, while the other side contains a pair of bedrooms with a bathroom in the middle.

Both sides open out to the central corridor, exposing them to the elements without compromising privacy.

"The rooms are separate but in a strong relationship to one another and the landscape, like a family of tents at a campsite," said the architect.

Large windows offer views out towards the lagoon to the north west, and beyond that to the dunes and the ocean.

"The Dogtrot House is a permanent campsite. It celebrates the frugality and elegance of shelter, it is a house for the carrying out of family life in the elements, it is a house that is everything you need and nothing you didn't. It is humble, poetic and without pretence," added Dunn.