News: British inventor James Dyson has revealed a design for an intelligent vacuuming robot that can be programmed remotely, which has been in development for the past 16 years.

The Dyson 360 Eye has built-in infrared sensors that, combined with a camera, help assist the robot in navigating a space. 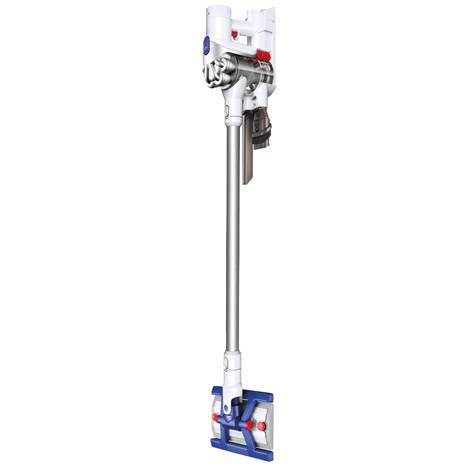 It can see around its entire shell by using a panoramic camera, with the images interpreted by a piece of software that creates a plan of the area being cleaned. The camera processes as many as 30 frames per second and features a shutter speed that matches the device’s travel speed, helping the machine accurately interpret its surroundings and avoid any objects.

An accompanying app for iOS and Android also allows users to program and run the 360 Eye remotely.

Rotating sweepers cover all edges of the robot as it moves across a room, and a patented carbon fibre brush bar is designed to remove fine dust from hard floors, while nylon bristles clean carpets.

According to Dyson, who founded his eponymous home appliances company on the success of his first bag-less vacuum cleaner, most robotic vacuum devices to date have been limited in their understanding of their surroundings, with low suction power to preserve battery life.

To solve this problem, the 360 Eye was equipped with an energy efficient, high speed V2 Dyson digital motor, which operates at just 100 watts, a spokesperson told Dezeen.

"It's the first robot vacuum capable of high performance cleaning," said Dyson in a video. "It can see where it's been and it can see where it’s going, it has a motorised brush bar which spans the full width."

"It's the only robot with continuous tank tracks," Dyson said. "This means that it maintains speed and direction across all floor surfaces. We’re bringing together all this technology that makes an intelligent robot, that cleans your home properly."

Over £28 million has been invested in the 360 Eye, with more than 200 engineers contributing to its development over a period of 16 years. According to Dyson, the navigation system alone required a team of 31 robotic software engineers working for over 100,000 hours, taking into account algebra, probability theory, geometry and trigonometry, and a further £150 million was invested in the Dyson Digital Motor.

To ensure the 360 Eye was hardy enough to navigate difficult areas on its own, Dyson engineers tested the device against a rolling road with steps it had to climb over. In total, the suspension was tested against 224,000 bump strips over 1,000 hours and travelled 810 kilometres.

Prototypes analysed approximately 1.5 billion images during the development, and the machine’s navigation was tested with specially created radio controlled rigs to emulate encountering obstacles. "Lighting was dimmed and made brighter, all variables were accounted for," the company said.

The 360 Eye launches in Japan in Spring 2015, with the rest of the world to follow later in the year.