London designer James Christian has created a series of architectural parasites intended to occupy empty rooftops, car parks and greens of dilapidated estates across the capital for his residency at the city's Design Museum.

One of four designers commissioned to produce work under the topic of Disruption, Christian's variation on the theme is Disrupting Housing. 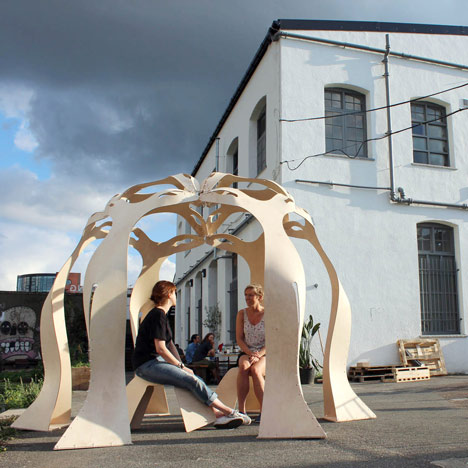 Lawrence Lek at Designers in Residence 2012

"I'm really interested in estates. I was very interested in the Rookery slums and how these were unimaginable awful places but had a sense of intimacy that we don’t see now," Christian told Dezeen.

Presented as "doll-house-scaled" models, the two proposed structures are designed as a new type of live/work paradigm that is instigated and shaped by the inhabitants of the building.

"It's two new forms of housing that could be inserted into existing estate structures. They're modelled on two examples of popularly condemned housing," said Christian. "Both projects are about programmed community – a community where there is something happening."

The new dwellings and workspaces have exteriors in keeping with the host building but interiors and courtyards are intended to be left open for customisation by each resident. A section through one model reveals brightly coloured lattice work representing this element of the design.

A series of storyboards charting the fictional scheme's progress – from construction and prefabrication of the buildings to the fictional lives of the residents and housing cooperative – will be added to over the duration of the exhibition.

Christian is a graduate of the RCA, teacher of Spatial Design at Middlesex University and co-founder of design studio Projects Office.

Each year the Design Museum invites four young designers to take up residency at the museum over a period of four months. This is the last residency that will be hosted on the museum's Shad Thames site before its move to Kensington in 2016.

The exhibition opened yesterday and will run until 8 March 2014.

Photography is by Luke Hayes unless otherwise stated.