News: Swiss firms MLZD and Sollberger Bögli have been named as the winners of a competition organised by the City of Lausanne to design a 12,000-seat football stadium.

The Tuilière Lausanne Football Stadium will provide offices for the city's sports department, a restaurant, meeting space and training facilities as well as the main sporting venue. 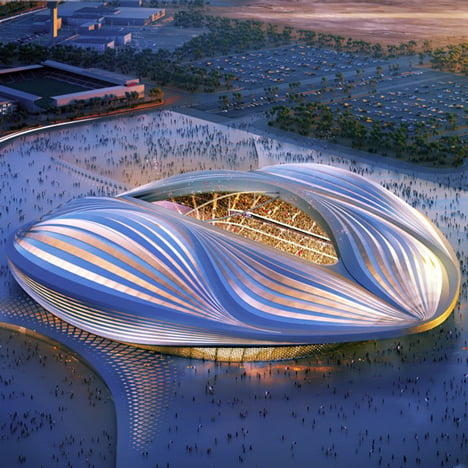 The five-storey rectangular building features a full height glazed facade. MLZD and Sollberger Bögli have carved triangular chunks out of the corners to create entrance points and punctuate the facade.

This was also intended to make the best use of the footprint of the building, creating additional public areas around the outside.

Inside, the structure that supports the tiers of seating is left exposed on the underside, allowing it to be viewed from the covered concourse spaces around the edge of the building. The same aesthetic is echoed in the staircases that provide access to the upper stories.

The ground floor, which houses the pitch, is also the location of the restaurant, while offices occupy one side of the first floor. The second and third floors are given over to tiered seating and VIP areas, while the basement houses storage and a media area.

Due for completion in 2019, the project is part of a wider development plan for the area in the north of Lausanne, which includes the extension of the M3 metro line and a new motorway junction – both creating public access points for the stadium.

A series of new football training grounds and pitches, along with dedicated athletics facilities, will also be constructed into a gently sloping site nearby after the stadium is complete.

The complex and the stadium will be separated by the Place de Lausanne-Sport, a new public space in front of the main grandstand.

"Its proximity to the centre of football and athletics will drive a strong synergy between the two infrastructures," said a statement from the city. "Besides rationalisation of land use, this will create a link between all generations of players."

The stadium is expected to cost €70 million and will be fully funded by the local government.