David Chipperfield first offered a glimpse of his firm's new building, completed in late 2013, as part of the Where Architects Live exhibition in Milan last April. 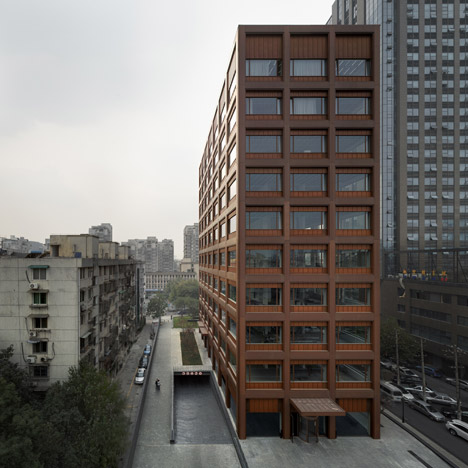 The renovated and extended complex serves as both a home and studio for the British architect.

Located at 696 Joachimstraße, the site had been bombed during the war. This meant two of the original buildings had been eradicated, leaving a five-storey block at the rear of the plot and a single-storey block that had been added later.

The architects sought to reestablish the same sense of enclosure as the original buildings had created on the site. To achieve this, they closed off the street facade and framed a sequence of semi-private courtyards with the addition of four new building volumes.

"They are suspended in ambivalence between restoring the situation from before the war damage and a new idea of a block interior," said a statement from David Chipperfield Architects, who also recently completed a copper-clad office block in China.

"Simple cubic volumes form independent structures, which can be perceived from different perspectives, while continuing the history of a typical courtyard structure and transforming it into a flowing exterior space," they added.

The largest of the new additions is the four-storey structure that fronts the street. This building houses an exhibition gallery and events spaces, as well as Chipperfield's own three-level apartment.

Concrete walls have been left unfinished, and are punctured on the facade by six large windows. These have been deliberately offset at each storey to add variety to the interior spaces.

Two more four-storey blocks adjoin the old piano factory building, which dates back to 1895. These create extra space for meetings and offices, leaving the old building to house the majority of the studios.

The final addition is a two-level garden block that serves as a staff canteen.

"Together with the garden courtyard, the canteen creates a semi-public location for socialising and dialogue, fostering a campus-like atmosphere," added the team.

Internal finishes are kept as minimal as possible, reflecting the style that the studio has become known for. Polished screed serves as flooring and doors are made from hand-painted wooden panels, while a number of surfaces are picked out in veined marble.