MenoMenoPiu Architects says its concept to reinvigorate the Seine with a string of capsule homes on stilts could help prevent Paris from becoming a "city museum" (+ slideshow).

Paris-based MenoMenoPiu Architects proposes installing a temporary series of raised cabins along the edge of the city's main river, which could be used as short-term accommodation for commuters or tourists. 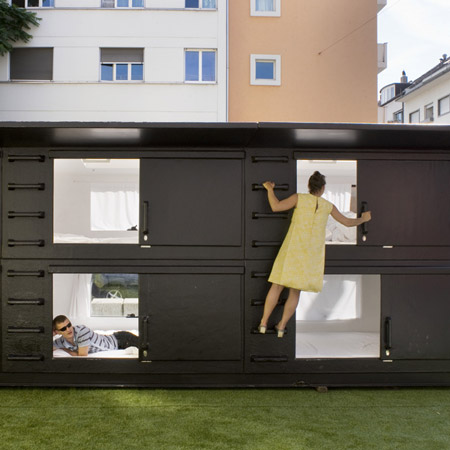 According to the architects, the Eauberge Paris Capsule Hotel would combat the "gradual decentralisation of Parisians" in the French capital by making the city centre more active, and hence more attractive for residents.

"Just like the other European capitals such as Rome, Venice, or Barcelona, Paris risks becoming a city museum," said MenoMenoPiu Architects, the studio founded by Rocco Valantines, Emanuele Salini and Alessandro Balducci in 2011.

"Paris has the largest concentration in square metres of museums in the world, nearly 120 museums in total, with many urban areas that tend to be transformed into living conservatories," they said.

Drawing inspiration from the city's riverside booksellers, as well as from Japan's capsule hotels, the architects propose introducing small boxy structures in the heart of the city, where they claim there are 9.5 kilometres of unused riverside.

The proposal images show metal-framed constructions, each containing a bathroom and a single or double bedroom, with views out towards Notre-Dame cathedral.

"To fully integrate oneself into the site and to have the lowest visual impact in places of such cultural importance, the cabins will be serviced by a secure corridor along the banks that will be accessible only by the users," added the team.

Renderings are by +imgs.