Portuguese studio SAMI Arquitectos has slotted a modern concrete house behind the crumbling stone walls of a ruined building, located on an island in the middle of the North Atlantic Ocean.

Pico belongs to a group of volcanic islands far west of Portugal and is an area that architects Inês Vieira da Silva and Miguel Vieira of SAMI Arquitectos have been working to rehabilitate for over 10 years. 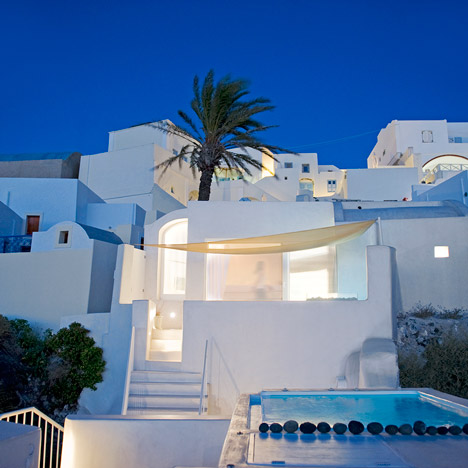 This latest project involved creating a holiday home for a couple based in Coimbra. The architects sought to construct a building designed around an existing ruin – formerly a house with a living space at the top and an area for animals below.

"A ruin was the starting point for the design," explained the architects, who have named the project E/C House .

"The project came from the will to maintain a ruin and thinking of a house that would value it, a house that could be modelled to it and take advantage at the same time, offering the most diverse and complex possibilities of living than the former typology."

The new house is a two-storey concrete structure that squats within chunky walls of dark basalt stone. Terraces and decks are dotted around the perimeter, some behind the ageing outer structure and some extending beyond it.

To ensure that plenty of light penetrates the double-layered exterior, the architects added large windows to every living room and bedroom. Many span the full height of a room.

"The house, modelled inside the walls of stone, was designed with generous openings, for light to come inside and for contemplation of the landscape," they said.

"These openings are sometimes lined up, and sometimes not, with the former openings of the ruin, creating new frames and relations with the original limits of the house."

The split-level ground floor, which once would have been used for housing livestock, now accommodates four bedrooms featuring timber-lined walls and built-in storage.

A staircase ascends up alongside one wall, leading directly up to a living room with an angled ceiling that follows the pitch of the timber-framed roof.

The focal point of this space is a timber bookshelf that covers the entire gabled end wall, wrapping around a large window that can also be used as an entrance.

A combined kitchen and dining room occupy the rest of this floor. Wooden closets offer storage at one end of the space, while sliding glass doors open the space out to three different terraces – one behind the stone and two that are exposed to the landscape.

"The project is a movement between a limit line, in stone, and the intervention volumes that are led by that same line, but sometimes flow independently or extend, whenever the necessity of space or of a view is needed," added Vieira da Silva and Vieira.

The commission for E/C House came in 2005, although it wasn't completed until eight years later. In the meantime, the architects also designed and built C/Z House, a residence with a stained wood exterior.

Photography is by Paulo Catrica.