Konings said she was leaving to "follow a new path" six years after teaming up with Margriet Vollenberg to jointly run the influential agency.

Konings (left in photo) and Vollenberg initiated the Ventura Lambrate district in Milan in 2010, taking over empty office spaces and disused industrial buildings in the north-east of the city and turning them into exhibition venues during the annual furniture fair.

"The last years at Organisation in Design were unbelievable; we travelled the world, worked on amazing projects and launched Ventura Projects," said Konings. "With a lot of pride I look back on all that we have accomplished. I made the decision to follow a new path and therefore say goodbye to Organisation in Design.”

The Ventura Lambrate district, managed via Organisation in Design subsidiary Ventura Projects, has grown to be one of the most vibrant and best-curated elements of the sprawling city-wide fair, acting particularly as a platform for emerging international designers.

Vollenberg founded Organisation in Design in 2005, with Konings joining in 2009. “I was looking for a partner to expand my company and when I met Margo in Tokyo we found out that our ideas of the design sector were too similar to not work together," Vollenberg told Dezeen.

"It was great to have a partnership these last years with her, to start the Ventura Projects and to bring Organisation in Design to where it is now,” she added.

Vollenberg said they started the Ventura Lambrate district because "exhibitors started longing for change. What we found was missing at the Salone del Mobile was a place that gave room to the designers and their works, their concepts, their experiments. There were a lot of clean cut, white pedestal presentations and we wanted to bring something different."

Vollenberg added: "Another key thing that distinguishes Ventura from other events is the diversity of exhibitors and the art direction of the complete area. We always strive to find a perfect balance in Ventura Lambrate.” 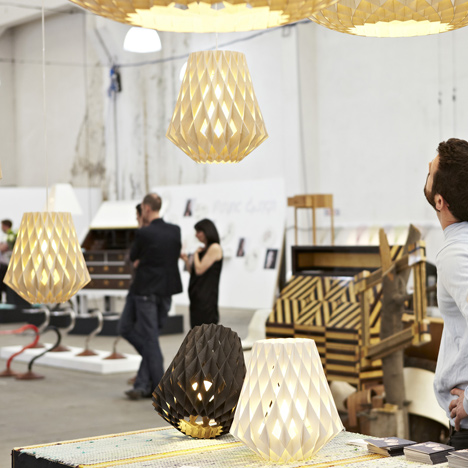 The duo have subsequently taken smaller versions of the Ventura exhibition concept to Berlin, London and Kortrijk.

The multi-faceted agency also acts as a PR company for Dutch designers including Studio Makkink & Bey and Wieki Somers. It has worked on cultural exhibitions such as the 23rd Biennial of Design in Ljubljana, Slovenia, for which they acted as guest curators.

The next edition of Ventura Lambrate takes place in Milan from 14-19 April this year. The temporary district is located in the Lambrate quarter of the city, a former industrial zone that was once home to the Lambretta scooter brand, which was named after the area.

Vollenberg said they came up with the Ventura Lambrate name "partly because the main street in the district is the Via Ventura, but also hinting at the English word adventure and Italian word avventura".

Dezeen has partnered with Ventura Lambrate since its inception in 2010 and is lead media partner for this year's event.