Rectangular panels of Japanese cedar and glass create a chequered effect on the facade of this Tokyo residence (+ slideshow).

Named Checkered House, the building was designed by Japanese architect Takeshi Shikauchi. The decorative facade was added to ensure sufficient daylight permeates all parts of the interior, but that residents are still offered some privacy.

"The chequered window allows [the building] to take in light from regular height, near the ceiling and near the floor and also to take in stable light from the north side during the day time," explained Shikauchi.

A three-sided canopy extends out from the front to provide shelter for the entrances and a parking space. 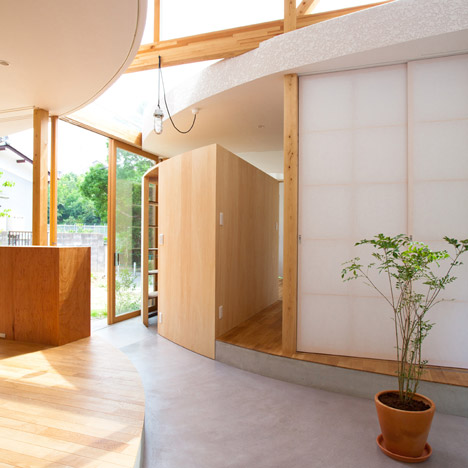 The overhang varies in width from 1.35 metres at its narrowest point to 2.85 metres at its deepest. Shikauchi wanted to reference the overhanging eaves of traditional Japanese houses, as well as shield the timber wall from damage.

"It is getting more and more difficult to use wood for housing in the city," explained the architect.

"I thought about designing a wooden house in the city that considers disaster prevention and maintenance, looking at the positive aspects of wood such as the soft texture which Japanese traditional houses used to have."

In contrast to the permeable facade, the sides of the building are covered in sheets of dark corrugated metal.

The house is located in Kita Ward, an area in the north of Tokyo. Inside, it is divided into two residences to create separate spaces for the client's family and his father.

A small ground-floor studio comprises a bedroom, bathroom and kitchen – enough for a single resident – while the residence occupied by the client and his wife takes up part of the ground floor and the entire upper level.

This includes an open-plan living dining and kitchen space, a bedroom and a reception room.

While the properties have separate entrances that allow the two generations to live independently, the kitchen of the studio adjoins with the entrance to the second apartment.

Wooden box shelves are built into the opaque sections of the two-storey facade, offering storage and display spaces for all residents.

Other spaces are simply furnished with wooden tables and chairs, while the kitchen features white fittings and a stainless steel countertop.