Graduate shows 2015: Royal College of Art graduate Cameron Bowen has developed a tape measure that enables tailors to generate digital fabric patterns while retaining the intimacy of the fitting process.

Bowen created the Parametric Tape Measure while studying on the RCA's Design Products course as part of an investigation into the intersection of fashion and technology.

"I really wanted to investigate the dialogue between digital fabrication and traditional craftsmanship," Bowen told Dezeen.

His aim was to maintain the relationship between the tailor and customer while being measured for a suit, but bring the process up to date using digital technology for better efficiency.

"I took a trip to Paris and was measured for a pair of trousers in the basement of a tailoring shop by two Iranian refugees," Bowen said. "It was really weird but really nice and one of the strangest things – the sort of moment that I wanted to capture in this project." 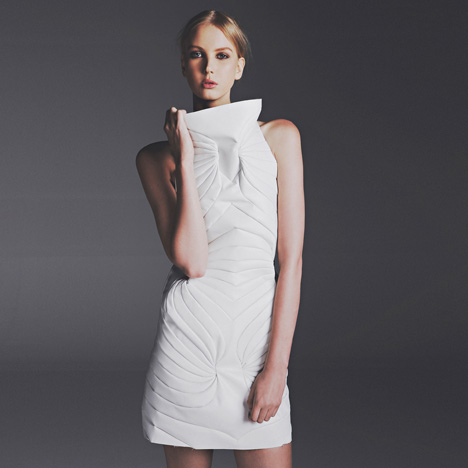 3D scanning will be used to create "unique fitted clothing"

Instead of using a technique like 3D scanning – which could be used to capture all of the body measurements without any physical interaction – the tape measure allows the tailor to work in the manner they are accustomed to.

However, the user doesn't have to pause to write down each number, as the device wirelessly sends the measurements to parametric modelling software – a type of computer program that alters shapes in response to changing numerical values. This software then builds the shape of the pattern bit by bit.

"I've created an interaction that allows for tailors to take customer measurements and simultaneously have those measurements translated as patterns in front of the customer," said Bowen.

The device incorporates a sensor that counts the rotations of the tape as it is pulled away from its source, and translates the figures into linear distances. The measurements have to be taken in a specific order, similar to how they are obtained in standard tailoring practices.

The distances are then translated by an algorithm that draws the patterns within a computer aided design (CAD) environment, which can be displayed on a screen while the process takes place.

Once the patterns are generated, they can be printed out to the correct scale and laid on the fabric to be cut around.

A variety of different technologies are being proposed and utilised to create customised clothing and accessories, including 3D scanning to produce bespoke dresses and augmented modelling tools for designing wearable 3D-printed pieces.

However, Bowen believes that these high-tech processes pose a threat to centuries-old tailoring traditions and the human interaction that comes with them.

"This level of intimacy becomes endangered as technology progresses," he said. Similar tools that link digital modelling and traditional craft include Unfold's set of instruments that measure physical objects and transfer the dimensions to a digital model.

The Parametric Tape Measure is on display at the Show RCA graduate exhibition in London until 5 July, along with a "power glove" for carving hard materials by hand and a tactile interface for navigating CAD environments.