Four young studios have created installations for Design Biennial Boston, an event that aims to provoke more "architectural imagination" throughout the city (+ slideshow).

GLD, Cristina Parreño Architecture, Landing Studio, and MASS Design Group were chosen by a jury of professionals and academics to create installations for the 2015 biennial, which opened last weekend.

Their contributions include an "urban periscope" composed of glass blocks and a series of pole-like sculptures made of wharf pilings from a local shipyard.

Design Biennial Boston, which launched in 2008, showcases emerging architects, designers and landscape architects in Boston who are producing distinctive work. The organisers hope the event will inspire better design throughout the city. 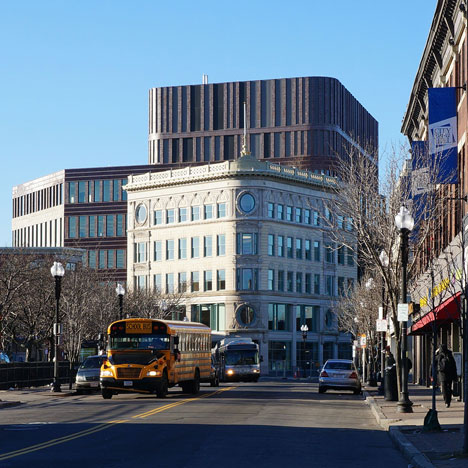 "Boston is in the midst of an enormous building boom, but as the mayor and countless others have pointed out, that boom has lacked architectural imagination," said architect Mark Pasnik, one of the biennial's three curators and a principal at the architectural practice Over, Under.

"The Biennial connects the public to the region's inventive emerging practices – and offers a way forward. If we want more sophisticated buildings and urban spaces, we should enlist practices like these in the making of our city."

The temporary installations have been erected in the Rose Kennedy Greenway, a downtown Boston park that was built on the site of a former highway. An aerial rope sculpture by artist Janet Echelman was recently installed in the same area.

Design studio GLD, founded in 2010, has used resin-infused fibreglass to create balloon-like forms that sit atop a white steel structure.

Called Grove, the installation is meant to evoke a dense cluster of trees. Visitors can see inside the hollow structure through nine viewing holes.

"By peeking inside, visitors not only see the voids that were formed around inflated mold, but might also catch glimpses of others doing the same," said the firm.

"Such chance encounters are common to urban life, but here they are exaggerated, reframed and celebrated as a moment of both estrangement and connection."

Cristina Parreño Architecture, founded in 2009, has created a 17-foot-high (4.8 metre) sculpture made of 350 custom-fabricated glass blocks.

Called Tectonics of Transparency: The Tower, the installation is part of an ongoing series by the firm that examines "the innate capacity of glass to withstand extraordinary compressive forces."

The sculpture is also meant to refer to its context. "The piece invokes the Greenway's infrastructural and maritime heritage," said the firm. "Working as a periscope, it recuperates the views from the elevated highway that only two decades ago rumbled overhead. From the more distant past, it recalls a lighthouse guarding the harbour before the city extended its landform into the water."

Landing Studio, established in 2005, has created 18 pole-like sculptures made of weathered oak pilings from a shipyard in the Boston Harbor.

The pilings were sliced into more than 1,000 cross sections using a chainsaw, with each two-inch-thick (five centimetre) piece sorted into one of three categories – round, "chewies", which are pock-marked pieces that have been nibbled on by marine borers, and oblongs.

The installation's name, Marginal, refers to so-called marginal wharfs, which typically are flush with the shoreline and are commonly found in New England.

"Marginal wharfs are characteristic features of New England, although many are in decay today," the firm said.

"Remaining from earlier industrial and shipping eras, they have now become markers of the interface between the ground and the sea, a dynamic landscape of tidal movement, ecological diversity, and contestation between the interests of expanding human development and the imminent threat of rising sea levels."

MASS Design Group, founded in 2008, has created a rounded structure made of machined lumber connected by customised metal joints.

The lattice-like structure covers a curving pathway. Called Lo-Fab, the installation was designed using high-tech fabrication techniques and was assembled by volunteers.

"The formation of an intimate space for only a few occupants at any one time identifies this spot on the Greenway as a contemplative retreat in the midst of the whirling activity of people and vehicles," said the firm.

"Our work seeks to provide infrastructure, buildings, and the human and physical systems necessary for growth, dignity and well-being," said the firm.

The 2015 Design Biennial Boston installations are on view until 25 September.

A corresponding exhibition about public art installations is being staged at the Boston Society of Architects headquarters.

"Boston has such a vibrant talent pool of designers, and these four installations remind us of how creative those designers can be when given opportunities," said Boston's mayor Marty Walsh. "I want Boston to be a municipal arts leader, and putting this type of exciting and thoughtful work into the public realm is what gets us closer to that goal."