Construction work has started on a new concert hall by Mexican firm Rojkind Arquitectos in Boca del Rio, Mexico, featuring a bold geometric form that references the jagged outline of an adjacent jetty.

The Foro Boca concert hall will provide a home for the Boca del Rio Philharmonic Orchestra, which was formed last year, as part of the city's wider aim to become a centre for music and culture.

Located at a breakwater between the mouth of the Jamapa river and the Gulf of Mexico, the concert hall is intended to dramatise the location and create a new cultural focal point.

"The dynamics and activities of the orchestra have had a successful social and cultural development, and have demonstrated the need to create a new social enclosure to serve as headquarters for the orchestra and its programs."

The 5,410-square-metre (58,000 square feet) building will include a large concert hall for 850 people, designed for classical, contemporary, and popular performances, as well as a 150-seat chamber music room. The facility will also include a training program for underprivileged students.

Its jagged form is conceived as a series of concrete volumes of different heights and shapes. The tallest of these will house the concert hall in the centre of the building.

"The building appropriates the timeless expression of the concrete cubes formed by ripraps [loose stones used as a foundation material] in the breakwater, assimilating them as its origin and re-interpreting them," said Rojkind. 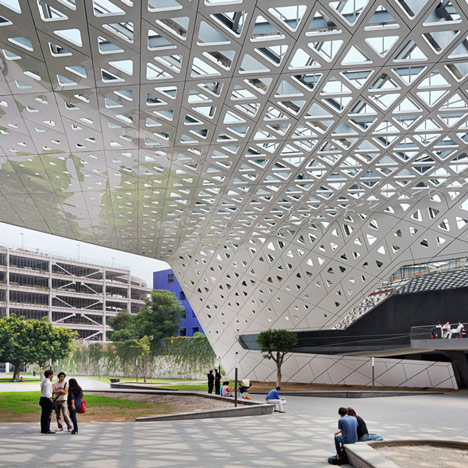 Visitors will enter the building through a triple-height lobby before entering one of the halls or the music library. A third-floor interior will open onto a terrace that offers sweeping views of the ocean and river.

The concert hall will be wrapped by a wide plaza extending onto the jetty on top of the breakwater.

Other firms that have recently designed concert halls include Spanish studio Barozzi Veiga, whose translucent glass building in Poland was recently shortlisted for the Mies van der Rohe Award 2015 and this year's Designs of the Year.

Boca del Rio is the municipal capital of Veracruz and was once an important port, but its economic centre is now the World Trade Center Veracruz development, which hosts conferences and conventions.

Rojkind Arquitectos and the local government hope the performing arts will be an important economic generator for an underdeveloped area of the city, which has struggled to control crime and pollution levels since the early 2000s.

"The Foro Boca's location is intended to articulate the dynamics of the central part of the city with the coastal avenue, and has the goal of functioning as an urban detonator capable of inciting modernity in the area," Rojkind said. "The forum itself is a tool that has permitted the reconstruction and renovation of the infrastructure and urban image of this part of the city."

The project is the cultural anchor of a new masterplan for the district, and will abut an emerging nightlife area with restaurants and entertainment venues.

Based in Mexico City, Rojkind Arquitectos was founded in 2002 by Michel Rojkind, and has established a reputation as one of the country's leading firms. Among its best-known projects are the Nestlé Chocolate Museum in Mexico City, and a laboratory building for the same company in Querétaro.