The mini-bar references Rud Rasmussen's back catalogue of products, pairing European cherry wood with canvas. Manz tried to "twist the typical use" of materials, thereby offering a new challenge for the cabinetmaker's craftsmen.

The mini-bar has been built from a wood frame that's been partially covered in blue and white canvas material, topped by grey Italian marble. 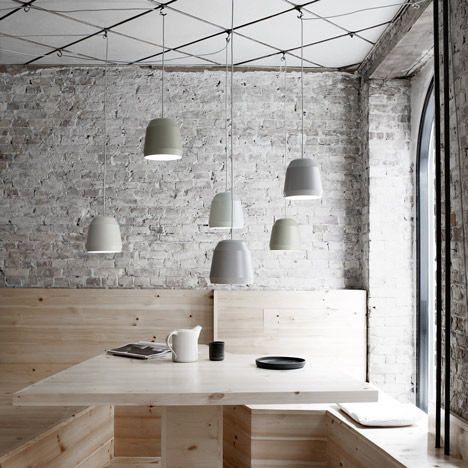 Mingus by Cecilie Manz for Lightyears

Mouth-blown crystal glasses, supplied by Finnish brand Iittala, rest on a set of burnished metal hooks set into the back of the bar, and bottles can be stored in a wood-lined chiller bucket. A yellow Bang & Olufsen BeoPlay A2 speaker hangs off the mini-bar's side, adding to the overall auditory experience.

"A mini-bar should be both a salvation and a temptation," designer Cecilie Manz said. "You should be able to find both water to quench your thirst and champagne to celebrate life."

Manz has stocked the cabinet with some of her personal favourites, including Japanese Hojiha tea, coffee, Riesling, dark chocolate and local apple cider.

"Her work constitutes the renewal of the unbroken line that extends from the grand masters represented in Rud Rasmussen's collection and history: Kaare Klint, Mogens Koch and Poul Kjærholm."

"In fact, her approach to design – from feasibility study and analysis through solution – is straight out of the Klint school and is one of the most exciting, inspiring examples of the interpretation of modern Danish design today," he added.

Rud Rasmussen was established in 1869 when founder Rudolph Rasmussen set up a cabinetmaking business in Copenhagen.

The company has continued to produce furniture with a focus on craftsmanship, bringing several notable designs to market including architect Mogens Koch's shelving system, and several chairs by Danish designer Kaare Klint.

Also during the event, the Copenhagen-based designer showed a pine and limestone table as part of GamFratesi's Mindcraft exhibition of Danish design.

She has previously designed aluminium lampshades for Lightyears, theatre-box-shaped shelves for Iittala, and a trestle table held together by strips of leather for Menu.