London office Delvendahl Martin Architects has merged and extended a pair of Victorian semi-detached houses in Oxford to create a new double-fronted home for one family (+ slideshow).

The newly formed 350-square-metre house by Delvendahl Martin Architects features a wide open-plan living space, with a pair of bay windows at the front and glazed extension overlooking the garden to the rear. The project, named Semi-detached by the architects, sits in the centre of the historic university town in southern England.

A two-storey brick and glass extension matching the width of the whole block unites the symmetrical properties at the rear to "create a strong visual link, making the building look like one house as it was originally intended".

"The project involved the conversion of two semi-detached houses in central Oxford into one family home," said the architects. 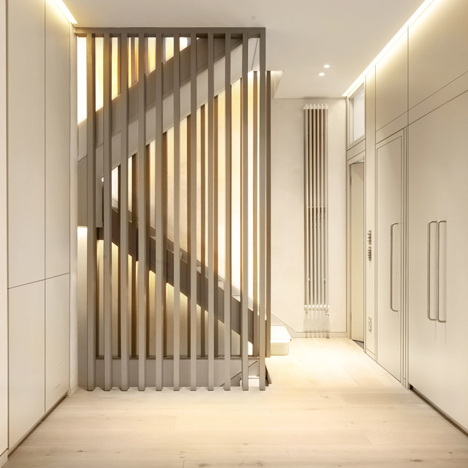 "Two existing Victorian houses are joined together by introducing a new staircase clad in stained timber at the centre of the plan and perpendicular to the party wall."

Internally, the two formerly separate buildings are linked by a pair of staircases – one in dark stained timber and the other made from reclaimed brick.

The stained timber staircase links bedrooms and an office on the two uppermost floors of the original house with the extended living room and kitchen on the floors below. The mottled light and dark colouring of the staircase contrasts the original wooden beams that support the original pitched roofs of the building.

Bricks from the demolition works were used to construct the second set of steps that negotiates the change in level between the entrance to the house and the back garden. A partial basement level adjoining the garden contains a hallway and kitchen.

A wide stretch of glazing in the centre of the extension can be opened to connect the dining area with the rear garden. Deep anodised aluminium frames obscure views from neighbouring properties and help to provide shade.

"The glass screen can be fully opened to make the space feel like an elevated terrace, facing the two rear gardens where the original dividing wall was retained," said the studio.

The glazing is bracketed by a pair of mono-pitched brick extensions – one containing the staircase and the other a toilet – while below a brick lower ground floor contains a hallway adjoining the garden.

The house is filled with custom-made furniture and fittings including lights, door handles and timber handrails.

The extension is built in contrasting brickwork to help distinguish the new construction from the existing Victorian structure.

Adding contemporary materials to highlight the addition of extensions has become a popular aesthetic when modifying period housing. In Sydney, Tribe Studio added a blocky brick extension to the rear of a timber-clad bungalow dating to the 1920s, while a Minimalist sunken glass box provides a new dining room for a heritage-listed house in London.

Similarly, Matt Gibson took his cues from European Modernism for a glass and zinc addition to a Victorian-era home in Melbourne.