Architect David Adjaye has introduced a faceted furniture range as the last in his Washington Collection for American brand Knoll.

The Prism Lounge Series includes a chair, an ottoman and a side table – each conceived as sculptural objects that can be viewed from all angles.

Shiny laminate surfaces in red, white, or black cover the canted sides of the bases – which swivel in the case of the chairs.

These contrast with the matte-finished fabrics and leathers of the seats, and the marble top of the side table. 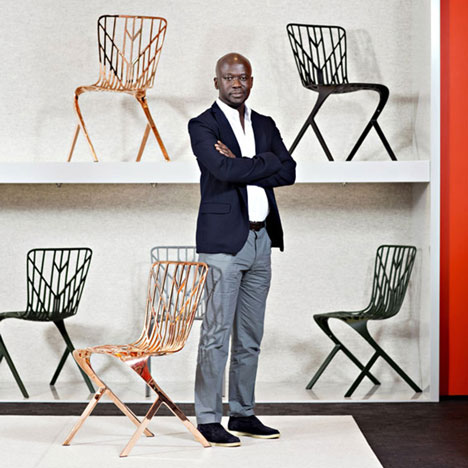 "Prism explores a number of common themes with other pieces in the Washington Collection, such as monumentality, materiality and history," said Adjaye, "relating specifically to the focus of my architectural work at that time."

Other pieces in the Washington Collection for Knoll include the Skeleton and Skin chairs, introduced in 2013. The line was expanded in 2014 and shown during Milan design week.

"The idea of suspending the body in space by the lightest possible means was explored by the Skin and Skeleton chairs," Adjaye said. "With Prism, I was seeking something very different. I wanted to reference the weight and mass of the idea of monument and I sought to celebrate the material presence of these forms."

The name the Washington Collection references the architect's Smithsonian National Museum of African American History and Culture, which is nearing completion in the District of Columbia.

Adjaye recently introduced a series of fabrics for the company's KnollTextiles division with vivid colours and African-inspired patterns.

Adjaye has also designed a seating collection for Moroso and a limited-edition stool for StandSeven.

He is currently the subject of his first ever career retrospective at the Art Institute of Chicago.