The Centre National des Arts du Cirque (CNAC) has been located on a 19th-century circus site in Châlons-en-Champagne, north-east France, since 1985.

Marseille firm Caractère Spécial and Parisian studio NP2F Architectes won a competition run by the Ministry for Culture and Communications to overhaul the facility and expand it into adjacent agricultural premises.

The 20,000-square-metre site and warehouse buildings of La Marnaise Agricultural Cooperative were purchased by the French government in 2006 following concerns over the proximity of its grain silos to a busy road.

The architects retained the existing structures, creating open areas for the fairground activities and added a new school and accommodation building to merge the CNAC's existing site with the new. 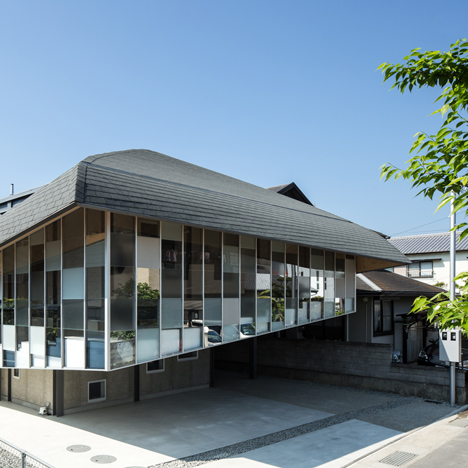 These buildings have a concrete frame and are covered in panels of grey corrugated fibre cement by manufacturer Eternit – matching the replaced cladding of the original structures.

"In order to affirm their presence and their role within the town, the school building and housing are fitted into previously empty spaces," explained the architects.

"The location and design of these volumes forms an extension of the existing buildings, recreating a facade along the site, aligned with the northern hangar."

"Rather than defining itself in opposition to the existing buildings, the project extends them, echoing their materials and forms," they added. "Eternit was chosen to restore the reputation of a cheap material."

The new school building slots between a silo and a hangar at the northern end of the site, while a 13-room student housing complex sits in one the corner of the plot where two roads meet.

Classrooms for dance, theatre and music lessons, as well as a sauna and dressing areas are located in the school building.

A staircase curves out of the cement cladding on the third floor of this building, before rejoining a balcony on the floor below.

Illuminated signage by graphic designer Malte Martin reading "What a Circus?" is affixed to the gable of one section of the complex.

Circus apparatus including a trampoline, pole and sponge-filled crash pit fill the concrete-framed space within.