A team led by Grimshaw has unveiled its contest-winning design for a race course and horse "theme park" in South Korean city Yeongcheon.

Grimshaw saw off competition from over 20 teams to win the bid for Let's Run Park Youngcheon.

The London firm teamed up with NOW Architects, as well as landscape firm Group Han Associates, engineer Dohwa Engineering and consultant DE Partners, to develop the proposal that is calls The Park EverYoung.

A grandstand with a latticed canopy will be integrated into the curving racetrack, which will be surrounded by landscaping and sinuous pools of water. The site will also feature a hotel and events spaces hosting a range of equine-themed sports and activities. 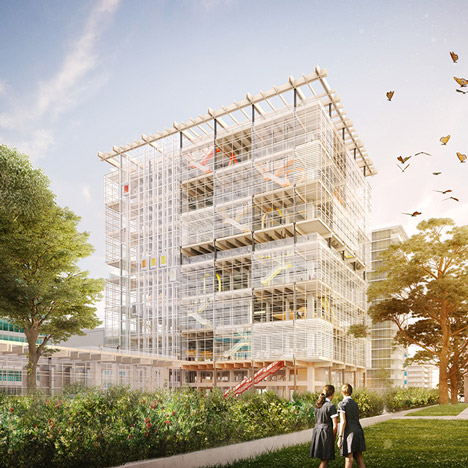 "The design for the park creates a natural and intuitive flow of landscape and activities between the various parts of the project," said Grimshaw in a statement.

"In particular, it uses a curved, sinuous body of water to link the race-goer facilities to the infield horse park."

The competition was organised by the Korea Racing Authority (KRA) and the International Union of Architects to encourage a new generation of punters.

But the KRA hopes the new 148-hectare "combined racetrack and theme park" will help to promote horse racing as a leisure and sports pastime, rather than a gambling activity.

"Let's Run Yeongcheon will be a catalyst for tourism in the region and is intended to boost the popularity of horseracing as an enjoyable day out for the whole family," said Grimshaw.

The competition jury included the chairman of the Korea Institute of Architects, Hanjongryul, as well as Gensler president Chris Johnson, and Francisco Sanin, who is architect director at Syracuse University.

LetsRun Park Yeongcheon is the second project in South Korea from Grimshaw, the UK-based firm founded by architect Nicholas Grimshaw in 1980. Its first was an ecological park in Seocheon where tropical plants, waterfalls and penguins are housed within huge glass and steel biomes.

The firm, which now has offices in Australia, Qatar and the US, is currently working on another racetrack design – the Curragh Racecourse in Ireland. It also recently unveiled designs for a high-rise school on the outskirts of Sydney.